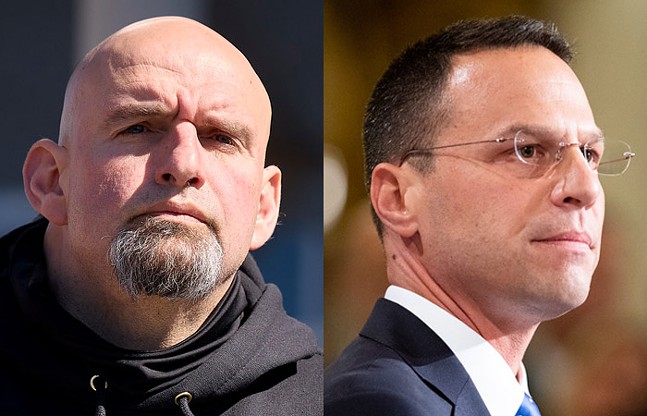 In the state’s nationally watched U.S. Senate race, Fetterman, the current lieutenant governor, leads Republican Mehmet Oz, a celebrity physician, 43% to 30%. But the race tightens to 45-36% when people who are leaning toward a particular candidate are included.

Fetterman, who has wielded social media to troll Oz, has deeper support among Democrats (76%) than Oz does among Republicans (62%), and leads among independent voters 34-17%, according to the poll.


More Pennsylvania voters believe Fetterman understands their concerns (52-28%), and shares their views on social issues (46-32%). But the two candidates are closer together (37-33%) on whether they are best suited to dealing with economic issues, according to the poll.


As is the case with Fetterman, Shapiro also leads among independent voters (40-24%). He also is viewed more favorably by state voters (44-32%), while Mastriano, a former Army colonel who has spread baseless claims of election fraud, is viewed more unfavorably (49-28%).


And, like Fetterman, more voters believe Shapiro understands their concerns (47-33%) and shares their views on social issues (45-32%). The candidates are closer together on whether they’re best suited to deal with the economy (36-33%).


“Neither Mastriano nor Oz is particularly well liked among voters and both are lagging with independents,” pollster Berwood Yost said in a statement. “If they can refocus their races to be mostly about the economy, though, they have a path to victory. But it is also notable that Democrats are more interested in the mid-term races now than they were in May.”

Despite recent gains, the poll still points to some structural problems for Democrats and President Joe Biden, with more than two in five (43%) respondents saying they are “worse off” financially than a year ago.

About a third of respondents (34%) say they believe Biden is doing an “excellent” or “good” job as president — a rating that’s unchanged since the last F&M poll in May. Republicans hold a statistically insignificant 44-42% lead on the so-called “generic ballot” pitting a hypothetical GOP candidate against a hypothetical Democrat.

“The electoral environment favors Republicans because the economy is still a concern, Biden’s job ratings are low, and people remain mostly concerned about their finances and the economy,” Yost said. “Since this environment clearly favors Republicans, the main considerations this fall will likely turn on the experience and qualities of the candidates.”