Joseph and the Amazing Technicolor Dreamcoat

He's dressed in a white loincloth and a pair of flimsy sandals. There's a studded dog collar around his neck and a look of anticipation on his face.

She's wearing a skin-tight black dress and thigh-high leather boots. She leads him around on a leash. There's a look of excitement on her face.

The audience oohs and aahs.

It's Pittsburgh Musical Theater's production of Joseph and the Amazing Technicolor Dreamcoat, now playing at the Byham. And while lyricist Tim Rice may insist that Joseph wears a coat of many colors, in this production, it's the blue that jumps out and grabs you by your Ishmaelite.

What began as a 15-minute pop cantata written by Rice and Andrew Lloyd Webber (not "Weber," as the Byham program states) for a high school Easter concert back in 1967 has, through rewriting and restaging, evolved into a 90-minute-plus mini-opera. Joseph is an important show because it launched Webber and Rice's careers and was their first publicly performed collaboration.

Those who watch reruns instead of reading their Bible might mistake the tale of sex and jealousy and betrayal for a plot of The Colbys -- a father favors one son with a fashionable coat, while his siblings get so hot under their caftans that they sell bro for 20 pieces of silver, telling Papa that the poor kid was eaten by wild beasts.

Pittsburgh Musical Theater's Ken Gargaro understands that the show's appeal lies in its frothy and fun flimsiness and light-hearted likability. He coats the production with a nonstop, energetic explosion of strong dancing and stronger voices; there are cartoonish and campy and sexy touches, as well as nods to Fosse, Berkeley and Brel.

This is indeed a strong-voiced, strong-spirited cast. David Toole is a solid, unabashed Joseph who knows that he (and his firm pecs) looks pretty damn hot even in oversized Depends. Brady Patsy does a mean, over-the-top Elvis (though he looks a bit more like the son Elvis and Little Richard never had). And Emily Lynne Miller, as the show's narrator, is no slouch ... but can she tone down the Sarah Brightman glare just a tad?

Joseph himself may have been a shrewd conniver, but he survived by being a dreamer and never giving up hope. That's the message Joseph and the Amazing Technicolor Dreamcoat drills home, and it succeeds with flying colors. 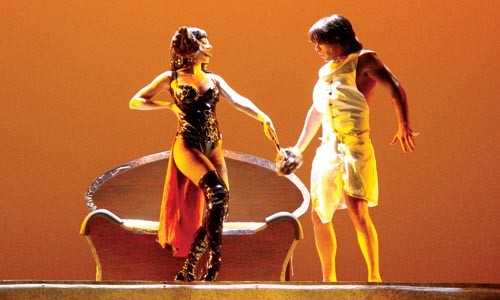