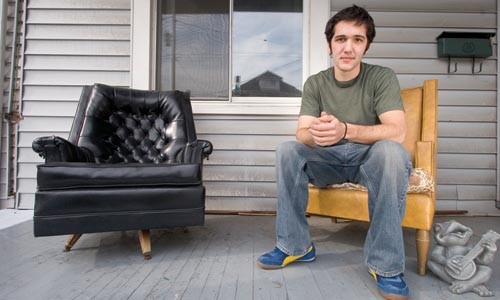 Jon Check's gruff baritone belies his 22 years. But that starts to make sense when the first influence he name-drops is Otis Redding. The Pittsburgh-based singer-songwriter also gets a gleam in his eye when he's talking about bass tones -- which belies the fact that, both in his funky trio and on his debut self-titled album, there's no bass guitar to be found.

"Bass is just a frequency, whether it's a keyboard, or a bass guitar or a tuba. A long as something's covering the low end, your song will have a bottom end," says Check, with a grin. The backing band started out with a conventional bass player, but one night he didn't show for a gig in a house-party basement. That night, the group decided to go on with just guitar, keys and drums. The heavy grooves remained intact.

"We're kinda gearheads," Check admits, "and we were always messing with this keyboard, and EQ'ing it a certain way, and putting it through bass amps and splitting it -- tweaking it to try to see if we could make it sound like a bass. And about the time that we figured out we could do that, was when this gig rolled around."

Now with just David Chapman-Jamison on drums, Check on guitar and vocals, and Greg Barbone on keys, Check's enjoying the economical lineup. "Why have four people in the band when one of them is more like a hired gun? Why not have three people who are super into it, and super into making every performance something new, and developing the sound?"

That sound draws on both big-name singer-songwriters like Springsteen and the R&B rhythms of The Meters, Soulive and John Scofield. It's a "singer-songwriter sensibility, but combined with this more upbeat party rock -- stuff you could play at a concert venue instead of a coffee house," he summarizes, "and I won't have the stigma of 'brooding singer-songwriter.'"

In some ways, he's closest to one of the godfathers of blue-eyed soul: Van Morrison. "You'll Never Know" sounds a bit like The Wallflowers covering a Van Morrison song. But the similarity's most apparent on Check's smooth ballad "Heroes" -- perhaps also the album's best. Over a Hammond organ groove that would fit seamlessly on Morrison's Back On Top, he sings, "All my heroes went to rehab / but they'll be back before the year / back for the award show / yeah, it was good for their career."

While this album is Check's solo debut, he's been playing music ever since he moved to Pittsburgh five years ago. He initially followed his older brother Matt to Pitt to study journalism, and the two soon started the bluegrass band Cornbread. "Cornbread was this band that turned into a lot of different bands down the line," says Check, referring to current local faves like Wino Riot and Borderless Puzzle. "But initially it was just five guys playing rowdy drunken bluegrass for hippie kids and bars." He soon began playing solo, and later edited The Pitt News and joined long-running funk and soul band Flowdown (now on hiatus). He still plays guitar for a handful of groups besides his own, including Yves Jean, and does a session date now and then.

When it came time to record his own record, Check had both experience and friends in the local scene to draw upon, scoring him a spot on Mr. Small's non-profit Creative Life Support label. "Flowdown recorded our album there, so I had a chance to experience the studio and meet some of the people behind the scenes there," says Check. Eventually, "they just agreed to put me on their non-profit record label ... the bottom line of it was, 'come in and record, and worry about the money later.'"

He's also not going to worry about what to do with his journalism degree until later -- Check doesn't plan to pursue anything besides music. With an L.A. manager shopping his work to larger record labels, and a busy tour schedule, Check's music could lead him some interesting places. Let's just hope that, like his song says, he makes it back for the award show.