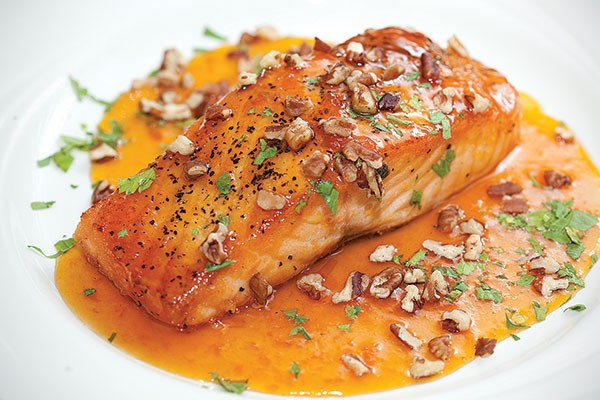 There is a class of local restaurants that can perhaps best be described as "Old-School Italian in an Old Working-Class Town." Often dating from the days when foreign cuisine meant either Italian-American or Chinese-American, these establishments may or may not have updated their menus to reflect current trends toward seasonal, locally sourced ingredients and regionally inspired recipes. From outward appearances, it can be hard to distinguish the worthy from the withered on the vine.

Of course, one sign that an older restaurant is keeping up with the times is the existence of a website, which also affords clues as to menu, decor and ambience. The website maintained by Johnny's, an old-school Italian restaurant in Wilmerding, is enthusiastic to the point of hyperbole. In text peppered with exclamation points, it disputes the presumptive claim that "There is NO way that there can be an INCREDIBLE restaurant in WILMERDING" with the assertion that Johnny's offers "Cuisine that you will NEVER forget ... EXCEPTIONAL service and a FANTASTIC atmosphere ... all at EXTREMELY REASONABLE PRICES!" We set out to put this to the test.

Johnny's was opened 20 years ago, and little seems to have changed over the years, leaving the decor in a mirrored, ivy-festooned state somewhere between dated and classic. The well-lit dining room wraps around a horseshoe-shaped bar at its center, and we were among several patrons following the Pirates game on the bar's lone TV. Clapping broke out when the Bucs won, even as another table was singing "Happy Birthday." It all gave credence to Johnny's claim that it is often compared to the famous TV bar, Cheers.

Johnny's menu of Italian restaurant standards in the pasta, veal, chicken, meat and seafood categories was tried and true. So we ordered what we felt like, trusting it would give us a good feel for the kitchen's approach to these familiar favorites. Overall, we found the preparations to be fairly up-to-date: exceptionally bright and slightly chunky marinara, fluffily battered calamari and legitimately spicy arrabiatta.

The calamari came out first, along with an appetizer of beans and greens. The squid rings were beyond tender, almost like a fine piece of sashimi. The accompanying marinara was mild, sweet and flavorful enough to invite double dipping.

The beans and greens were elemental, served without the sausage that sometimes finds its way into this dish, and in a ladleful of their own light broth. Though lacking any kick or even much savor, the escarole retained its heartiness, tamed by wilting without being rendered bland.

Our entrees also ranged from good to excellent, with most toward the excellent end. The only exception was an aglia e olio (on the menu as "aglia oil") that was by turns bland and harsh with raw garlic. Chicken Romano was pounded thin without destroying the poultry's meatiness, while the light, wrinkly coating soaked up squeezes of lemon and offered a hint of egg flavor. Veal marsala was close to perfect, with thin morsels of tender meat in a sauce that was sweet yet deeply flavored. Shrimp, an uncommon addition, enlivened it by adding bursts of plump brininess. The side of risotto had good texture, but the chicken broth that was used to cook it came through too obviously. The vegetable side was a single, hand-sized stalk of broccoli, bright green yet tender, drizzled with butter.

Arrabiatta was offered with chicken, shrimp or sausage. Angelique opted for sausage, thinking it would bring the most spice to this supposed-to-be spicy dish, which often gets a wimpy treatment in Italian-American restaurants. There was nothing wimpy about the banana peppers which infused every bite of Johnny's arrabiatta, though. In fact, the sauce was more like a deconstructed sausage-stuffed banana pepper than a traditional arrabiatta, but that was fine because it was so good.

Whether Johnny's actually fulfills all the superlatives on its website is for each customer to decide. To us, Johnny's tasted all the better for being a genuine community landmark, the kind of place where you can go for happy hour, a family meal or a celebratory birthday dinner, and always find the right experience.