“If you expect everyone to love you all the time, then you’re a very, very foolish person who’s going to really have a miserable life.”

John Lydon has just loudly expectorated in my ear, via an overseas phone call. This act of nature is not meant as a commentary on our conversation. “Sorry,” he says, sounding sincere. “You know, I am a singer and I will hack. It’s funny — the first thing to go is not the singing voice. It’s the talking voice. I lose the normal register, but I can squeak extremely high.”

When he coughs up another one a minute later, generating a laugh from both of us, Lydon decides to dispel a punk-rock myth. “I would like you to inform an audience that I never aimed that at another human being,” he says. “I have a bin! That was another thing that them early journalists got wrong, implying that we liked to spit on each other. Sorry, no. I don’t know such foolish people!”

Once upon a time, John Lydon flustered veteran TV interviewer Tom Snyder by answering questions about Public Image Ltd., with as few words as possible. And of course, a few years earlier, he made television history when, as Johnny Rotten, he and his bandmates swore during a live television interview.

Today, Lydon speaks at length, in a congenial manner. When discussing performances by the current lineup of Public Image Ltd. (PiL), he says the band aims to please. But then he qualifies that thought: “Actually, we aim to please ourselves, and hopefully that translates further down the line. Other bands compromise or go for the popular vote or the current trend. We’ve always been above and beyond that kind of nonsense. So when I say we aim to please ourselves, that’s what I mean quite literally, because we love creativity.” 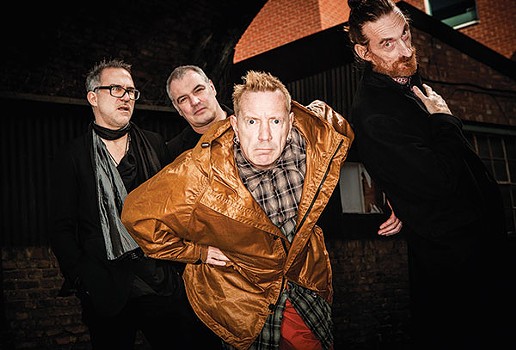 Photo courtesy of Paul Heartfield
In the face of adversity: John Lydon with Public Image Ltd.

If he doesn’t sound like the confrontational John Lydon of yore, it may be because after years of battling with record labels and troublesome band members, he says he’s finally having a good time. The feisty persona is alive and well, and a bad question could turn him at any moment. But he’s up for a good conversation.

In recent interviews Lydon has mentioned how a childhood bout with meningitis affected his memory and derailed him for several months. He teared up during one chat as he talked about it. (He famously cried in the Sex Pistols documentary The Filth and the Fury, as he recalled the death of Sid Vicious.) Maybe the angry young man has been misunderstood all these years. “Well, I reckon! Deliberately so from day one, don’t you?” he asks. “Initially, the outburst was, ‘Oh, dumb working-class [kids], what do they know about anything?’ Then [there was] bitter resentment when they realized I actually had opinions that kind of meant something. [Then there was] outright negativity and continuous hostility.

“But at the same time, while I’ve been learning to smile in the face of adversity, there’s also been some people out there that started to pay attention, and understand what we really do. And so in life, it’s six of one, half-a-dozen of the other. And if you expect everyone to love you all the time, then you’re a very, very foolish person who’s going to really have a miserable life.”

He clearly has a good handle on human nature. “People by nature — this is why I love us all — we’re just born fucking awkward,” he says. “It really is just a question of square pegs and round holes. We’re meant to be that way. That’s what character is. ‘I will not conform.’ ‘Oh go on, John. Why not?’ ‘’Cuz I won’t!’”

PiL’s latest album is titled What the World Needs Now …, but Lydon’s healthy perspective hasn’t softened his lyrics. Rather than finishing the album title with “love, sweet love,” as Dionne Warwick did, his trademark yelp calls for “another fuck-off” in the song “Shroom.” He also welcomes listeners at the start of the album by barking, “What? You fucking nagging again?!”

The original lineup of PiL, which debuted in 1978, featured dub-influenced bass lines from Jah Wobble and slashing guitar riffs from Keith Levene. Metal Box, a set of three 12-inch 45s packed in a metal canister, offered the group’s finest hour, leaning closer to the prog bands like Can than the punk crunch of the Sex Pistols.

Various players have come and gone, leaving Lydon as the sole original member. The current lineup features guitarist Lu Edmonds (formerly of the Damned and the Mekons), drummer Bruce Smith (formerly of equally abrasive jazz punks the Pop Group) and bassist Scott Firth. In place since 2009, this incarnation lays claim to a visceral excitement on the new album. Live, they’re combining new tracks with songs from the early days, which, Lydon chuckles, are played much better now.

The one time during our talk that Lydon gets short is when, after he mentions the word “reunion,” he’s asked if he would ever hook up with Wobble and/or Levene. The whole question isn’t complete before he fires back, “No. No. No. No.”

He explains, more casually, “Don’t ask me to be bitter. Indeed, I have no bitterness. They’re all my friends. But I can’t go back and work with certain members because their wage demands and ego trips were just so far in excess of reality. Love ’em forever, but good riddance and take your egos with you. Can we move on?”

It good to know he has.