John Fetterman’s latest series of campaign ads takes the standard voter testimonial format and turns it on its head, with vignettes from Republican voters who say they prefer the very blue Democratic lieutenant governor over his Republican opponent, Dr. Mehmet Oz.

“I’ve been a Republican all my life,” Vince Tulio of Montgomery County says in a video posted to Fetterman’s Twitter account. Tulio says he’ll vote for Fetterman because the Democrat was born in Pennsylvania and lived in the state his whole life. “I want to elect someone who has the best interest at heart for everyone in Pennsylvania, not when it’s convenient in an election year.”

In another video spot, Colleen Bixler of Westmoreland County says she’s “tired of Washington Republicans and Mitch McConnell,” and hits a key message of the Fetterman campaign casting him as a Washington outsider: “Fetterman won’t fit in in Washington. That’s the point.”

The “Republicans for Fetterman'' ads will run on TV and digital platforms, according to a release from the campaign. It’s the latest punch in the increasingly bare-knuckled brawl of a race for the U.S. Senate seat being vacated by Republican Pat Toomey.

And oddly enough, “Republicans for Fetterman” isn’t the first ad campaign in the Pennsylvania Senate election cycle to demonstrate support from voters across the aisle. As the Pittsburgh Post-Gazette reported Tuesday, a political action committee called the Republican Accountability PAC has put up more than two dozen billboards in Pittsburgh, Philadelphia, and Harrisburg expressing support for Josh Shapiro, the Democrat running for Pennsylvania governor. One of the billboards, with a photo of a man the P-G identified as James Carmine, a Republican from Fayette County (who made an unsuccessful run against Pittsburgh mayor Tom Murphy back in 2001), reads “I’m a conservative. I’m a gun owner. I’m voting Josh Shapiro.”

Fetterman maintains a six-point lead over Oz in the most recent poll from USA Today and Suffolk University. On Wednesday, his campaign announced it had raised more than $1 million since Tuesday, suggesting that supporters were rejecting criticism from political reporters about Fetterman’s use of closed-captioning during interviews. He suffers some temporary hearing loss as a result of a stroke he suffered in May.

In a statement to Pittsburgh City Paper, Fetterman says, “There’s one thing that unites Democrats and Republicans here in Pennsylvania, it’s that nobody trusts Dr. Oz.”

Oz campaign spokesperson Brittany Yanick says in a statement emailed to City Paper that the Republican candidate “has the support of Republicans, Democrats and Independents who want to see safer streets, lower taxes, and a stronger economy for the middle class.”

Yanick adds that Fetterman “doesn’t take questions and dodges the media” and that the Democrat “supports decriminalizing all drugs, eliminating life sentences for murderers, and opening heroin injection sites in our communities - radical positions that are causing voters from all walks of life to support Doctor Oz."

Fetterman has expressed support for decriminalizing marijuana, and the claim of “eliminating life sentences” has been fact-checked as “distorted” by the Poynter Institute, a nonprofit journalism organization. And Fetterman did several interviews with national and state news organizations this week alone.

Fetterman campaign spokesperson Emilia Winter Rowland says in an interview with City Paper that the “Republicans for Fetterman” series was inspired by the number of Republicans who approached the campaign offering their support.

“These are people who were not only showing up for John, but are some of his most enthusiastic and engaged supporters, who are organically getting the word out and talking to their friends and family, folks at their church,” Rowland says. “Many of them have reached out to our campaign to say ‘how can we help?’”

Rowland pushed back on a question about whether the enthusiasm from Republican supporters would translate into votes for Fetterman in November, saying it was a different scenario than the 2020 presidential election, where the Lincoln Project, a group of GOP pundits, ran viral anti-Trump ads that had little apparent effect on the outcome of that election.

“With John, it’s the contrast between him and Oz,” Rowland says. “John has always been the same guy and never deviated from his values and has always stood for what's right no matter what.” 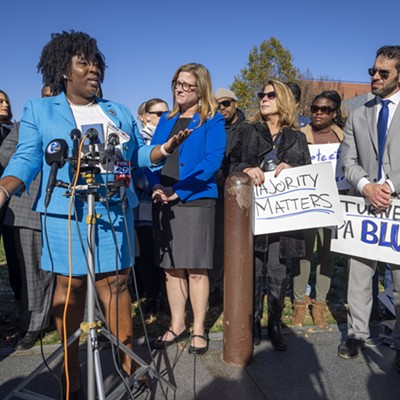