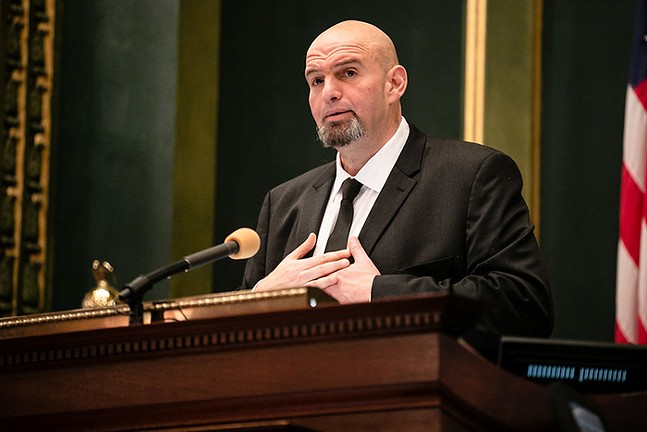 According to the Philadelphia Inquirer, Fetterman plans to tell supporters in an email, “You already know exactly where I stand. I haven’t had to ‘evolve’ on key issues, because I’ve always said what I believe is true and have been saying the same things for 20 years.”

The 2022 Senate race in Pennsylvania is said to be one of the most competitive of the cycle and could play a huge role in determining who controls the Senate after 2022. The Democrats recently took control of the chamber after winning two races in Georgia, but the majority is razor thin at 50-50, with Vice President-elect Kamala Harris providing Democrats with a tie-breaking vote.


Every one of PA’s 67 counties matter.

Forgotten communities + neighborhoods must be rebuilt.

Legal Weed for USA + ending the War on Drugs.

Pennsylvania needs a United States Senator that knows this is True too.

Incumbent U.S. Sen. Pat Toomey (R-Lehigh) announced last year that he would be retiring at the end of his term, opening up the seat. Fetterman, who resides in Braddock, appears to be the first politician indicating publicly his intention to run for the seat.

“The 2022 cycle in Pennsylvania is going to be one of the most, if not the most, important races,” Fetterman told the Inquirer.

Fetterman ran for U.S. Senate in 2016, when he was the mayor of Braddock. In 2016, he finished third in the Democratic Primary, but he outperformed expectations against his better funded challengers, especially in his home region of Southwestern Pennsylvania. He carried Allegheny County in the 2016 Democratic Primary.

Since being elected as Lieutenant Governor in 2018, Fetterman has focused his efforts on criminal justice reform, advocating for legal recreational marijuana, and being a strong ally to union efforts across industries, including at the Pittsburgh Post-Gazette.

He has long been an ally to the LGBTQ community, as he ordained the state’s first same-sex marriage as Braddock Mayor, before it was legal to do so. He has also been a loud advocate on the benefits of immigrants to the U.S. His wife and nonprofit leader Gisele Fetterman is formerly an undocumented immigrant, and now a U.S. Citizen.

During his first senate run, he called for a moratorium on natural-gas drilling, aka fracking, until the health consequences were better studied. Since then, he has softened his criticism of fracking, but not become an outright advocate for it.

Fetterman’s profile has also risen considerably since his first Senate run. Just this week, Fetterman was booted from the state Senate chambers by Republican leaders who said he was breaking procedure in his attempt to get legislators to seat state Sen. Jim Brewster (D-McKeesport). Republicans have also targeted him by passing a law that would prohibit his office from hanging marijuana flags and LGBTQ flags from his office balcony in Harrisburg.

He is quite active on social media and has become especially popular on Twitter, particularly for his tongue-in-cheek calls that Sheetz convenience stores are superior to Wawa stores.

In a tweet, Fetterman also said that “Healthcare is a basic human right” and indicated his focus on a potential run would be targeted at every part of Pennsylvania.

“Every one of PA’s 67 counties matter,” Fetterman tweeted. “Forgotten communities + neighborhoods must be rebuilt.”