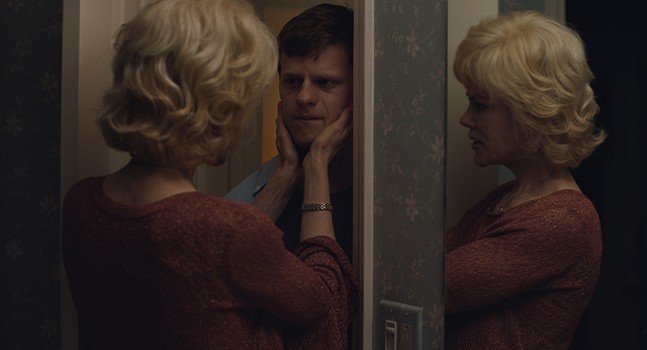 There is a part in Boy Erased where a "counselor" lines up the boys in a gay conversion therapy program and instructs them to stand with their feet splayed, fists at their waist, like Superman.

"Triangles are the strongest shape," he says, hoping this masculine pose might "cure" them.

But the shape is powerful for other reasons. Pink triangles were used as a symbol in Nazi Germany to identify gay people in concentration camps, and now, the LGBTQ community wears the symbol as a badge of pride.

Boy Erased, directed by Joel Edgerton and based on a memoir of the same name by Garrard Conley, follows Jared (Lucas Hedges), a teenager in Arkansas who is outed to his parents. His father Marshall (Russell Crowe), a Baptist preacher, is disgusted. His mother Nancy (Nicole Kidman) is gentler but doesn’t immediately stand up for her son. They send him to conversion therapy, believing that it will make him a better person. They also believe the conversion therapy is run by a certified professional. Instead, it's run by Victor Sykes (Edgerton), a man with no qualifications who emotionally and physically abuses the kids in his care.

Kidman is a standout, having solidified her niche as a doting, but not subdued, wife. Hedges has a blankness to his face that works in his favor, like he's ready and open to feel any emotion.

The movie is straightforward in its message and delivery, at times realistic to the point of rendering itself dull, not in topic but more because of Edgerton’s unimaginative directing. The scenes and dialogue aren’t particularly memorable, but the subject sticks.