Joe Biden in Pittsburgh: Trump “can’t stop the violence because for years he has fomented it” | News | Pittsburgh | Pittsburgh City Paper 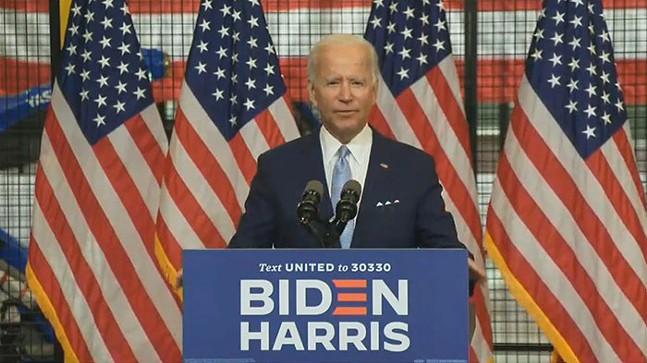 President Donald Trump and some of his campaign surrogates have been attempting to cast blame on the unrest on Biden, despite the fact that Trump is the one in office and currently running the federal government.

“He can’t stop the violence because for years he has fomented it,” said Biden of Trump. Biden was visiting Hazelwood to tour the site of robotic facility Mill 19 in the Hazelwood Green site, a new tech-centric development that sits where a steel mill used to be.

Earlier this summer, Trump sent border patrol agents and other federal law enforcement into cities like Portland to arrest protesters. He has since threatened to do the same with other cities. Yesterday, he gave his support to right-wing militia who are traveling to Portland, seemingly to get into conflicts with Black Lives Matter protesters. He also shared a video posted by a white nationalist.
One right wing protester was charged for 1st degree homicide in Kenosha, Wis. after he allegedly shot and killed two Black Lives Matter protesters. A right-wing protester was also shot and killed in Portland, Ore., but it's unclear who carried out the shooting.

“His failure to call on his own supporters to stop shows how he is not capable,” said Biden of Trump. “He sows chaos, rather than creating order. … He refuses to even acknowledge there is a racial justice problem in this country. But he has no problem with right-wing militia and white supremacists who are often armed better than the police at protests.”

Biden said Trump is incapable of healing. “He doesn’t want to shed light, he wants to generate heat,” said Biden, noting that if he were president, he would try to calm the tensions between Black Lives Matters protesters and police officers.

Biden also said that “we have to stand against violence in every form it takes,” and noted excessive police force and shootings from right-wing militia groups, as well as looting and rioting.

During his about 20-minute speech, Biden asked repeatedly if Americans really felt safer under Trump. Biden pointed out how murder rates have increased under Trump, while violent crime rates lowered when Biden was vice president. Biden also criticized Trump’s attacks on health care and on social security. (Overall, violent crime is down under Trump, though many cities have seen increases in homicides.)

The Trump campaign issued a response shortly after the speech. “As predicted, Joe Biden today failed to condemn the left-wing mobs burning, looting, and terrorizing American cities," said a statement from the Trump campaign. (As noted above, Biden specifically condemned burning and looting.)

Biden didn’t take any questions from reporters. He ended his speech, again condemning Trump’s tactics of sowing division between Americans. Trump has repeatedly attacked “Democrat-run cities,” even though tens of millions of Americans live in these cities, and more people in 2016 voted for Democrats than Republicans.

“This is not who we are,” said Biden. “At her best, America — and if I have anything to do with it, we will be again — is opportunistic and full of hope. … Building the future is what America does best.”