Joe Biden during Pa. campaign stop: "I’m going to be the strongest labor president we’ve ever had" 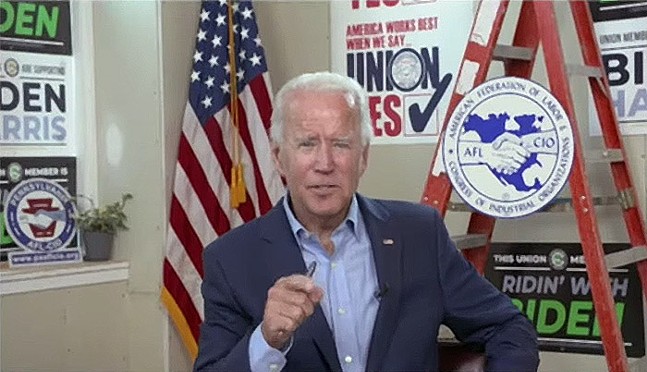 “I’m going to be the strongest labor president we’ve ever had,” Biden said during a virtual town hall with AFL-CIO President Richard Trumka. Biden spoke from Pennsylvania AFL-CIO headquarters in Harrisburg on a Labor Day Monday.

Biden told an audience of 2,700 union members tuning in on Facebook from across the country that “it’s not enough to praise our essential workers, we have to pay them.” He vowed to personally go after corporate executives who interfere with efforts to organize.

“It’s not the financial wizards of Wall Street who make this country run — it’s you, the essential workers,” Biden said. “Wall Street did not build this country … it was built by unions.’

Biden has made supporting organized labor one of the main planks of his campaign platform. He has proposed, among other things, incentivizing unionizing and collective bargaining.

He also has called for passage of legislation known as “The Butch Lewis Act,” which would prop up some 300 multi-employer pension plans across the country by creating a new agency within the U.S. Treasury Department that would administer loans to cash-strapped pension plans using money from the sale of long-term bonds.

“If I’m in the Oval Office, guess who’s going to be there with me: Unions,” Biden said, also calling for passage of the stalled HEROES Act, which would provide a new round of coronavirus relief to workers and cash-strapped state and local governments.

Hours before Biden’s speech, President Donald Trump spoke from the White House’s South Portico, where he vowed to deliver a COVID-19 vaccine, perhaps even “during the month of October,” the Washington Post reported. He took a shot at Biden, charging that the Democratic nominee “shipped away our jobs, threw open our borders and sent our youth to fight in these crazy endless wars.”

Trump again dismissed a published report, citing unnamed senior military personnel, who said he referred to U.S. service members as “losers” and “suckers,” calling it a hoax, the Post reported.

On Monday, his voice rising in anger, Biden laced into Trump over the remarks, which now have been confirmed by multiple news organizations, including Fox News, which later tried to walk back the story.

“He’ll never understand … he’s not made from the same stuff as us,” Biden said.

Then, referring to his late son, Beau Biden, the elected Delaware attorney general and a former member of the Delaware Army National Guard, Biden said his son “didn’t serve with losers and suckers. He served with heroes. He served with American heroes.”

Beau Biden died of an aggressive form of brain cancer in 2015.

Trump campaigned in Westmoreland County late last week, days after Biden delivered fiery remarks in Pittsburgh, where he slammed Trump’s response to anti-racism protests in Kenosha, Wisc., and elsewhere in the country. Vice President Mike Pence was in the state on Sept. 1.

Trump carried the Keystone State by less than a percentage point in 2016. While Republicans have notched recent voter registration gains, suggesting GOP voters are becoming more energized as the fall campaign season formally begins, Biden has still held an edge in statewide polls. As of Monday, Biden held an average 4.2 percent lead over Trump in Pennsylvania, according to the RealClear Politics polling average.

Democratic Harrisburg turned out for Hillary Clinton in 2016, where the former secretary of state beat Trump 49-46 percent. Trump prevailed in the other two counties that now comprise the 10th Congressional District, Cumberland and York counties.

The district, which was redrawn by the Pennsylvania Supreme Court in 2018, is now considerably more purple. Republican U.S. Rep. Scott Perry, who now holds the seat, is considered among the most vulnerable congressional incumbents in the country, which also means the district should be competitive for Biden in 2020.

“The suburban voters in Dauphin, York and Cumberland counties are frustrated and want a reasonable alternative,” said two-term state Auditor General Eugene DePasquale, of York County, and the Democratic nominee for the seat.

The role of organized labor

Support and turnout from organized labor will be critical to Democrats’ chances this fall. Biden’s running-mate, U.S. Sen. Kamala Harris (D-Calif.) was in Wisconsin on Monday, where she made a Labor Day campaign stop. Pence was also set to campaign there, according to published reports.

Labor leaders were forced to do some serious soul-searching in 2016 after union households failed to show up for Clinton, despite a massive outreach effort, Politico reported at the time. Unlike Clinton, however, Biden has deep ties to organized labor, and officials believe that will make a difference in 2020.

“Joe Biden has been a friend to organized labor for decades,” Frank Snyder, the AFL-CIO’s secretary-treasurer, told the Capital-Star on Monday. “Our members remember when Joe did this and that,” on labor’s behalf in Washington.

In a joint interview, Snyder, and Pennsylvania AFL-CIO President Rick Bloomingdale, said the union is planning a similar outreach to its members in 2020. Mail-in ballots will start going out to tens of thousands of Pennsylvanians, including union workers, starting Sept. 14.

“We have 50 days we can vote in Pennsylvania,” Snyder said. “We have been moving the message to our members, we will continue to escalate our preparations … You plan the work, you work the plan.”

Bloomingdale sharply criticized Trump’s efforts to undermine mail-in balloting. The president has falsely claimed on the stump that mail-in voting is ripe for fraud and will allow Democrats to steal the election. He had similar scorn for for a bill, sponsored by legislative Republicans in Pennsylvania, that would effectively ban drop boxes.

“I think they’re doing it because Trump asked them to,” Bloomingdale told the Capital-Star on Monday. “No one said drop boxes were an issue when the bill passed. Last year they were safe, and now they’re not … it’s just a political stunt.”

Biden met with union leaders and voters in Lancaster County before his Harrisburg stop. The discussion was held in the backyard of a Biden supporter under the midday sun. Biden sat in a chair in a semi-circle with two seated union members on one side and two on the other.

Frank Sirianni, the president of the Pennsylvania State Building and Construction Trades Council, told the former vice president that “our union members are better off because of you,” adding that labor “couldn’t ask for a better friend to become president of the United States.”

Bob Faust, a retired iron worker, said he tried to get an autograph from Biden years ago but Secret Service said he couldn’t have a pen. He said he was able to put his kids through college on union wages.

Biden asked Howard Nash, a member of the National Guard, how his colleagues had reacted to Trump’s reported remarks that members of the military are “losers” and “suckers.”

“Do you think most of those guys are suckers?” Biden asked

In Harrisburg, a look of visible pain crossed the face of Ty Rewolinsky, a retired Marine who served two tours in Iraq, as he talked about Trump’s remarks about the military.

“It made me feel horrible,” said Rewolinsky, who added that he’s voting for Biden.

Back in Lancaster, Patty Bowermaster of Local 1156 said Trump’s executive orders have been devastating for unions and collective bargaining. She said they’ve gutted the ability to properly represent bargaining employees.

“We need you,” she told Biden.

Pool reports from USA Today are included in this story.
John Micek is the editor of the Pennsylvania Capital-Star, where this story first appeared.