An entertaining and fascinating documentary about "the greatest movie never made" 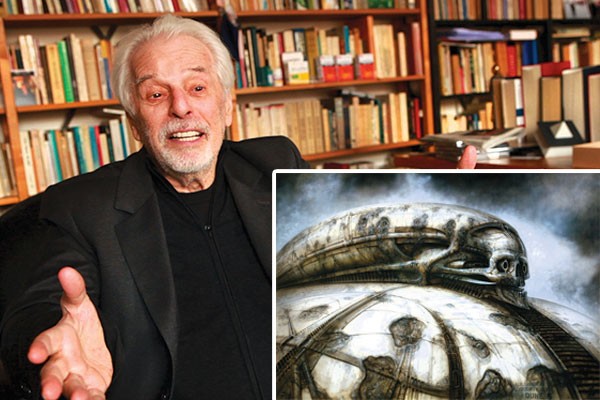 In English, and several languages, with subtitles
Starts Fri., May 9.
Regent Square.

Time has a way of clarifying whether crazy ideas from the past were, in fact, genius ideas not yet ready for prime time. That's certainly the case made in Jodorowsky's Dune, Frank Pavich's entertaining and illuminating documentary about a science-fiction film that never was.

But it was a film that got planned — and a project full of ambitious ideas and images that lived on in other films. So there's a valid argument for what one participant claims: "It was the greatest movie ever made ... even though it was never made."

In 1974, Chilean filmmaker Alejandro Jodorowsky bought the rights to Frank Herbert's sci-fi novel Dune. It was perhaps an odd purchase: Jodorowsky was known for his loopy, surreal cult features El Topo and The Holy Mountain, and he hadn't read the book. But Jodorowsky wanted to create a film that would "be a prophet to change the young minds of the world," and the complex Dune would be his vehicle.

It sounds nutty, but the more Jodorwosky and his colleagues (dubbed at the time as "spiritual warriors") talk now about their vision for Dune, the cooler it sounds. Pavich's film takes us through the planning stages: Jodorowsky's visions, fortuitous encounters and mad obsessions that gave shape to the film.

Jodorwosky re-wrote the story, and hired French comics artist Moebius to illustrate storyboards. ("I use Moebius like a camera," Jodorowsky explains.) A lightly animated recreation of the proposed opening scene — in which the camera tracks in from outside a galaxy to a close-up of dead men in a spaceship — is stunning, even in pencil sketches. Other warriors were added: a special-effects guy (Dan O'Bannon); artists (Chris Foss and H.R. Giger); actors (David Carradine, Mick Jagger, Orson Welles and Salvador Dali); and musical acts (Pink Floyd and French art band, Magma).

Today, studying the artifacts of pre-production and getting swept up in Jodorowsky's enthusiasm, this Dune looks fantastic — full of grand ideas and even grander visuals. But in mid-1970s Hollywood, there was no market for an expensive sci-fi head-trip. It's clear, though, that Jodorowsky's evocative storyboards made the rounds and were noted: Explicit scenes and visual themes from Dune would surface in the next three decades of sci-fi films, starting with Star Wars. (A differently realized Dune was filmed in 1984, by David Lynch.)

Now a lively 85, Jodorwosky is generous and phlegmatic about the outcome of his never-to-be masterwork. "From this supposed failure came a lot of creation," he says, referring to the team members he assembled, who went on to other projects. "Dune is in the world like a dream, but dreams can change the world."