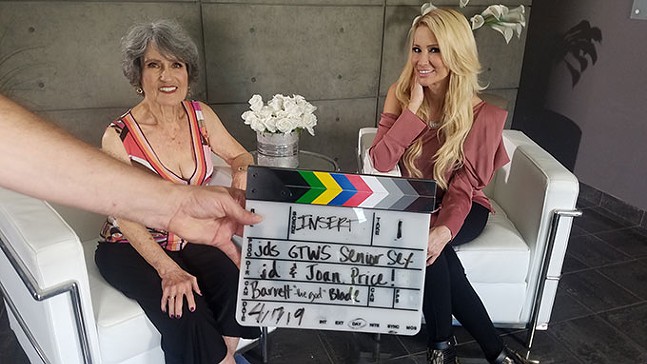 When I was growing up, every year on her birthday, my grandmother would declare that she was once again 39. What this taught me as a child was that growing older was so terrible that we had to pretend that it didn’t happen. While it may be outrageous to pretend to be 39 for decades on end, my grandmother’s fear of aging was not irrational. In a culture that pushes our seniors to the margins, rendering them invisible, it is no wonder that she actively resisted this process. This marginalization is particularly noticeable in the realm of sexuality. While we may obsess about sex in our culture, all of our sexual representations lead us to believe that sex is only  for the young.

After screening the film, I had a chance to sit down and talk with Price about her work as an advocate for ageless sexuality, a conversation you can listen to in full on an upcoming episode of the Peepshow Podcast. Price talks frankly about the way that our bodies change as we age, and the impact this has on our sex lives. Put simply, she says, “The old ways don’t work the way they used to anymore.”

“Communication is so much a part of this.”

Price believes it is a mistake, however, to assume this means that a pleasurable sex life is over. Instead, she says that recognizing what is different about senior sex is a step toward a good sex life in later years. First, she says, “Erections are not always dependable, they are not always hard enough for penetration.” Moreover, “Vaginas are not always as comfortable to accept penetration.” Letting go of this expectation opens up the way for other types of sex, though. She comments, “[Seniors] are not counting on rock hard erections, that doesn’t even matter.”

She also points out that as we age, we may need “more build up to achieve arousal and more arousal to achieve orgasm.” For this reason, sex toys may be become really important. “We need more stimulation than we can get by hands, fingers, or tongues alone,” Price says. “Sex toys can be the difference between orgasm or no orgasm.”

Even more important than sex toys is being able to communicate what feels good and what doesn’t. “You need to be able to give feedback, you need to be able to say, ‘I don’t think my knees can handle this position,’” says Price. “Communication is so much a part of this.”

Though I have passed my 39th birthday, I am still far from my senior years and have yet to deal with some of the sexual issues that seniors face. However, the advice that Price gives is broadly applicable to all people: communicate your desires with your partner; let go of expectations of what you are supposed to be doing sexually and embrace what actually feels good to you; be open to your own changing body and desires (and that of your partner’s); and take the sexuality of all people, regardless of age, seriously. The film, and Price’s work more broadly, are beautiful representations of all of these lessons.