If there was ever any criticism given to the Pitt Jazz Seminar and Concert when it was under the direction of Nathan Davis, it related to the similarity in each year’s program. While all of the guest performers were top-flight musicians, many of the same names returned every few years. Considering how jazz music, by nature, should evolve continuously, the program often seemed a bit stagnant.

Geri Allen became director of jazz studies at the University of Pittsburgh in 2013, and she has breathed new life into the concert, which traditionally takes place after a week of free seminars on campus. Her first concert as director included more than simply hard-bop standards. Most conspicuously, the evening opened with an extended interpretation of a piece by her predecessor, Dr. Davis.

Drummer Cobb might have the most celebrated dossier at the program. He appeared on Kind of Blue, the Miles Davis classic now considered one of the best jazz albums of all time. He is also the last surviving member of that band. After working as a teacher at Manhattan’s New School, Cobb reappeared in the mid-’90s with Cobb’s Mob; at one point, that band included students like pianist Brad Mehldau and guitarist Peter Bernstein, now leaders on their own. 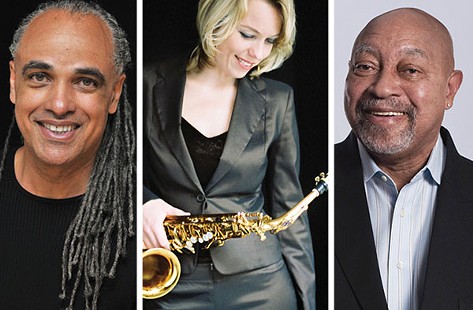 Cobb doesn’t consider himself a band leader, though. “I’m just the guy that plays the drums with the name out front,” he told JazzTimes. Whether he’s swinging gently or laying down a strong groove, the then-85-year-old still played with authority on The Original Mob, a 2014 release that reunited the quartet.

When Pharoah Sanders first gained recognition, he was sharing the stage with John Coltrane in the mid-1960s, creating a commotion with signature growls and spine-tingling shrieks. While many tenor saxophonists utilized the extreme registers of the horn, few had the visceral quality of Sanders. He returned to Pittsburgh four years ago for a sold-out appearance at the August Wilson Center. These days he balances the wails with a more thoughtful side, so Sanders should bring a distinct edge to the seminar, especially if the ensemble attempts his spiritual classic, “The Creator Has a Master Plan.”

In addition to seminars by some of the musicians, the week’s activities include panel discussions about Pittsburgh natives Mary Lou Williams (including a screening of the documentary about the pianist), Billy Strayhorn and Erroll Garner (whose archives were recently donated to the University of Pittsburgh).