It's a solo anthology of comics styles and witty riffs 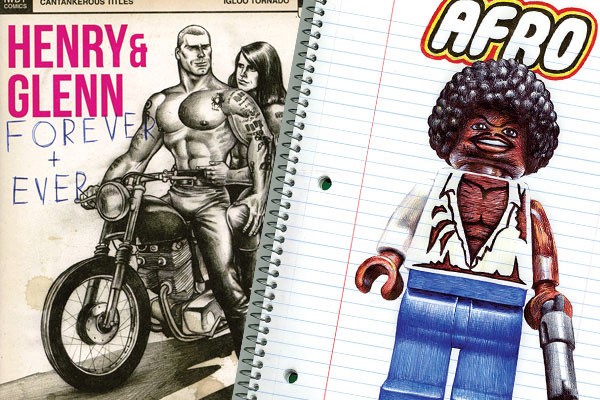 Jim Rugg's new comic book, Supermag (ad house Books), is a one-man anthology. In the luridly colored Mexican-wrestling homage on the cover, the beefy, masked hero, eyes bulging like hard-boiled eggs, plants a flying two-legged kick on the snout of his hapless blond foe. In the background, in black-and-white, a strangely passive crowd watches.

What's going on here? No time to say! Supermag is up, up and away, into one-pagers depicting bathroom-stall sex (with note-perfect hipster-bar graffiti), notebook sketches of cosmic superheroes and subtly ironic homages to Pittsburgh-based Rugg's own now-iconic ghetto avengers, Street Angel and Afrodisiac. The glossy 56 pages also include not one but two cheerfully perverse, nearly dialogueless two-pagers about anthropomorphized rodents meeting violent fates.

But two things really set Supermag apart. All comics artists are comics geeks, but Rugg is unusually apt at drawing in (and usually simultaneously parodying) an array of styles, from the manly, clean-lined bravado of kiddie action comics to the expressively dolorous shadings of graphic novels for adult hipsters. Using digital tools, Rugg also mines the grainy textures and inimitable hues of vintage comics.

One of the rodent comics, for instance, is done Saturday-morning-cartoon style, while the other looks as if it were sketched by an adolescent girl with a dark side. There's a piss-take on Vanilla Ice that parodies trading cards, and not one but three appearances by Rugg's wisecracking, jingoistic action-adventure gorilla, US Ape, earning satirical laughs with a deceptively simple style. In "Bigfoot Fist Fight," Rugg depicts a battle between the mythical primate and his namesake truck with all the hormone-addled fury of a teenage boy bored out of his skull in fourth-period English.

Then there's the "narrative collapse" Rugg references in his preface. Supermag includes two ripping action yarns: "Duke Armstrong: The World's Mightiest Golfer" and "Captain Kidd: Explorer" (both co-written with frequent collaborator Brian Maruca). And the artfully wry "Loveless" is a romance-comics spoof. But some of the most intriguing entries aren't "stories" at all. They're fragments — covers for comics that never were, or the beginnings or middles of narratives with the rest omitted.

Two pieces, amusingly, depict Rugg himself struggling to draw "US Ape." Another depicts a fragment of a middle-aged affair. It portrays the woman's desperation without sacrificing empathy. Maybe Rugg ought to complete this one; on the other hand, it's entirely possible that, in five panels, he's told you all you need to know.