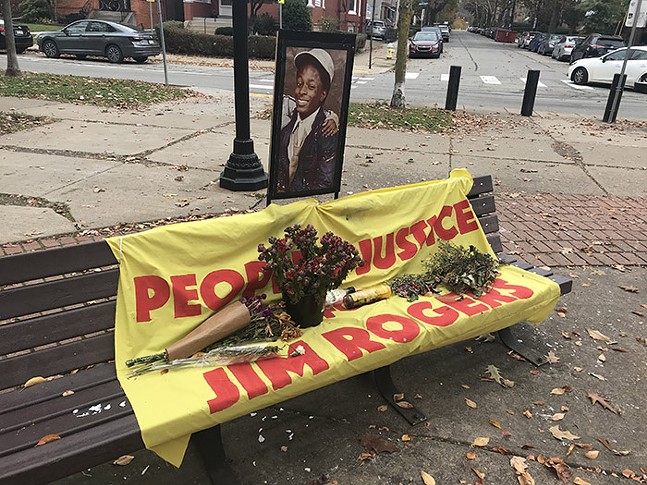 CP Photo: Ryan Deto
A memorial to Jim Rogers on a bench in Friendship Park in Bloomfield
The Allegheny County Office of the Medical Examiner has determined that the “manner of death” of Jim Rogers, the man who died after being tased eight times by Pittsburgh Police officers, was an accident.

ACOME defines an accident as a “death that occurs as the result of an event with unintentional consequences.” The Commonwealth of Pennsylvania also recognizes four other manners of death that could have been determined by the medical examiner: homicide, suicide, natural, and undetermined.

“The manner of death is the circumstance that led to the cause of death,” read an release from ACOME. “It is based upon all available knowledge of a particular case including terminal events, scene investigation, police report, social, and medical background information.”

Rogers, 54, died on Oct. 14, 2021, less than 24 hours after Pittsburgh Police officers tased him eight times in response to a neighbor’s 911 call alleging that Rogers had stolen a bicycle from a Bloomfield front yard. Neighbors told WPXI they believed the man was homeless and he took the bike for a ride before returning it. The bike was for sale for $50. The woman who owns the bike says she wanted to get rid of it, and told WPXI the man could have had it for free.

When police arrived at the scene, one officer confronted Rogers, attempted to detain him, and then tased him eight times. Several other officers also responded to this incident.

Rogers reportedly asked for help and medical attention at least 13 times as he was sitting in the back of a Pittsburgh Police vehicle after he was tased on Oct. 13. According to an executive summary of an internal investigation obtained by TribLive, Rogers banged his head on the seat for 17 minutes and exclaimed repeatedly, “I need a hospital, I can’t breathe, get a medic, help me.”

While the press release clarified that “these are not criminal determinations, but medical ones,” Allegheny County District Attorney Steven Zappala has previously stated that he would wait for the results of the medical examiner’s investigation before announcing whether he plans to file charges against the officers involved.


Zappala spokesperson Mike Manko issued this statement after Allegheny County Medical Examiner Karl William's determination: "Dr. Williams has always been objective in his medical analysis. It is obvious that Mr. Rogers' interaction with the police is central to a determination of criminal culpability in connection with the cause of death. As is usual, such a determination will require further scrutiny and explanation by Dr. Williams and his office."