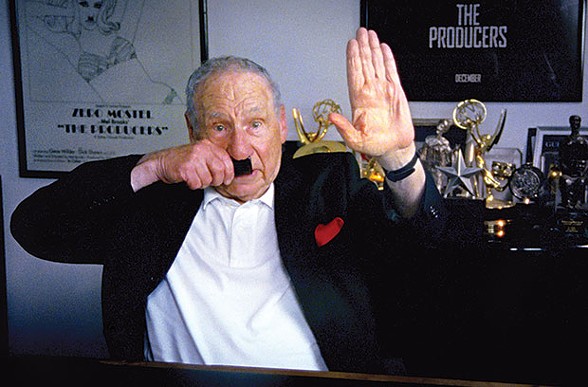 Mel Brooks in The Last Laugh

The 24th annual JFilm, formerly known as the Pittsburgh Jewish-Israeli Film Festival, opens its 11-day run on Thu., April 20. The festival offers 20 recent films from Israel and around the world representing Jewish experiences from the comic to the dramatic, in narrative features and documentaries.

Films screen at the following venues: Manor, in Squirrel Hill; Carmike 10, at South Hills Village; Hollywood Theater, in Dormont; and Seton Hill University, in Greensburg. Tickets for most films are $12 for adults and $6 for under 18. For tickets and more information, visit www.JfilmPgh.org. Below are reviews for four films screening the first week:

PAST LIFE. Set in the 1970s, Avi Nesher’s Israeli drama focuses on two families coming to terms with events that occurred in Europe during World War II. The adult daughters of Dr. Milch — now comfortably relocated to Israel — undertake some detective work to determine why, when one sister was visiting Germany, an elderly Polish woman accused her of being the “daughter of a murderer.” It’s a difficult journey, but facilitated by the younger generation working through the collateral damage imposed by their scarred parents, and perhaps, the healing power of music. In various languages, with subtitles. 5:30 p.m. Fri., April 21

FAMILY COMMITMENTS. Hanno Olderdissen’s German comedy sets up a slew of at-odds players and lets the silliness unfold. There’s one gay Jewish man, his overbearing mother, and an artist in the attic. The boyfriend is Arab, and not out to his father, who rents from the Jewish mom. Add a pregnant student who claims one of the gay men is the daddy. It’s a cheerful mess of culture clashes and misunderstandings, albeit with a predictable outcome — but such is the manner of situation comedies. And it’s nice to have everything wrap up happily. In German and Arabic, with subtitles. 5:15 p.m. Mon., April 24, and 4:30 p.m. Sat., April 29

AKA NADIA. In Tova Ascher’s Israeli drama, the story begins in the late 1980s, when a young Palestinian woman named Nadia moves to London with her boyfriend. But things go wrong in an unexpected fashion. The film then jumps ahead 20 years to catch up with Nadia living with her husband and kids in Jerusalem — seemingly happily, until a figure from her past causes her new life to unravel. A quietly acted melodrama that probes deeper into issues such as national identity, family, loyalty and whether some acts are unforgiveable. In Hebrew and Arabic, with subtitles. 7:30 p.m. Mon., April 24

THE LAST LAUGH. “Comedy puts light onto darkness, and darkness can’t live where there is light,” explains comedian Sarah Silverman, in Ferne Pearlstein’s documentary essay. The film asks a fascinating question: Is it ever OK to make jokes about the Holocaust? Several notable funny people, most of them Jewish, weigh in, including Gilbert Gottfried, Larry Charles, Rob and Carl Reiner, and Mel Brooks (who gave us “Springtime for Hitler”). There are lots of clips, provocative musings (why The Producers works, and Life Is Beautiful doesn’t) and explanations for humor’s power as a survival mechanism. Laughter is also a form of protest: A Holocaust survivor, whom we follow through the film, knows her greatest revenge is to enjoy the life the Nazis weren’t able to take from her. 7 p.m. Wed., April 26