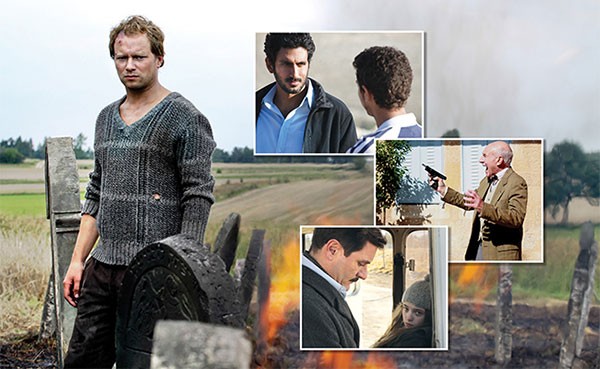 The 21st annual JFilm, formerly known as the Pittsburgh Jewish-Israeli Film Festival, opens its 12-day run on Thu., March 27. The festival offers 17 recent films from Israel and around the world representing Jewish experiences from the comic to the dramatic, as presented through narrative features and documentaries.

Films screen at the following venues: Manor, in Squirrel Hill; Carmike 10, at South Hills Village; Seton Hill University, Greensburg; and Rodef Shalom, Oakland. Tickets for most films are $10 for adults and $5 for viewers under 18. For tickets and more information, call 412-992-5203 or visit www.JfilmPgh.org.

Below are reviews for four films screening the first week:

BETHLEHEM. Yuval Adler's thriller tracks the complicated relationship between an Israeli secret-service officer and his teenage Palestinian informant. A violent event strains the relationship, and both parties struggle with conflicting allegiances. Viewers, too, will remain unsure of the veracity of the sympathetic characters, but it's quite likely things will go badly. In Hebrew and Arabic, with subtitles. 5 p.m. Fri., March 28. Manor

HUNTING ELEPHANTS. This Israeli comic caper from Reshef Levy finds a teenage boy hooking up with his feisty grandfather and his nursing-home cronies in order to rob a bank. There's a smidgen of heartwarming about family and confronting old age, but it's mostly laughs, particularly when a long-estranged English relative arrives. "Lord Simpson" (Patrick Stewart) is a struggling actor (fresh from Hamlet: Revenge of the Sith) whose hammy thespian skills prove invaluable to the heist. In English, and Hebrew, with subtitles. 7 p.m. Sat., March 29, and 4:45 p.m. Tue., April 1. Manor

THE GERMAN DOCTOR. In 1960, an Argentine family befriends a German doctor, who winds up staying at its Patagonia hotel. The doctor is particularly attentive to young Lilith, lively but undersized, and Lilith's mother, who is pregnant with twins. Meanwhile, an Israeli operative is working in a nearby German expatriate community, seeking to uncover former Nazis, including the infamous Dr. Mengele. A quiet but fraught film from Lucia Puenzo, a melodrama intertwined with history, a coming-of-age story with gorgeous mountain scenery. In Spanish and German, with subtitles. 9 p.m. Sat., March 29, and 5:15 p.m. Wed., April 2. Manor

AFTERMATH. Franek returns to his small Polish village after 20 years in Chicago, and finds his brother feuding with the townsfolk. The problem, as revealed slowly in Wladyslaw Pasikowski's tense psychological thriller, isn't the present, but the past — specifically what may or may not have happened during the Nazi occupation decades ago. A provocative exploration of the corrosive power of prejudice, but also of the will to rise above it. In Polish, with subtitles. 7 p.m. Tue., April 1, and 5 p.m. Fri., April 4. Manor