The stand-out here (as in all good productions) is the actor portraying Judas. 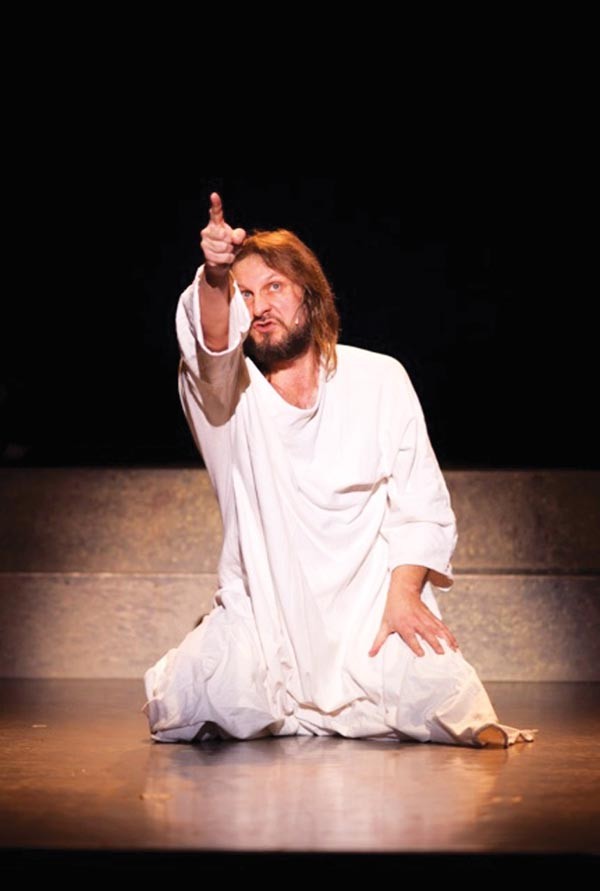 The Messiah has returned.
Once again.
He was last seen in August, when He appeared on stage at the Benedum.
He's back on Broadway in yet another revival.
And now He's holding court at the Byham, in Pittsburgh Musical Theater's production of Jesus Christ Superstar.
For a man who's been dead some 2,000 years, Christ sure gets around. He's resurrected (almost) as often as Joseph, of Technicolor Dreamcoat fame.

Those expecting a literal interpretation of Jesus' final week on earth must remember that Andrew Lloyd Webber and Tim Rice's JCS was first conceived as entertainment rather than a religious piece; indeed, JCS originated as a concept album before rocking Broadway in 1971.
JCS is very loosely based on the Gospels, and emerges as a hip passion play with a heavy emphasis on human passion. And despite the title, the star is actually JC's betrayer, Judas, here depicted as a victim of circumstance.
PMT founding director and JCS director Ken Gargaro has stitched together a solid, if mundane, production. There are several mishaps: Mean-spirited Pharisees Caiaphas and Annas are gun-toting gangsters, replete with a Dean Martin soundtrack; Herod and his crew are jarring in camouflages and camp; and Don DiGiulio's portrayal of the King is a rough impersonation of Arnold Schwarzenegger, complete with a tasteless aside referencing Arnold's extramarital affairs and divorce from Maria Shriver.
The best scene is the crucifixion and what follows: Post screams, the remaining moments are done non-verbally and in tableau. Jonathan Sage's minimalist set works well, though Lisa Elliott's choreography and Gargaro's blocking are too often clunky.
The stand-out here (as in all good productions) is the actor portraying Judas. David Toole is strong vocally and capable of creating charismatic moments. Unlike Marys before her, Emily Lynne Miller's Magdalene doesn't fawn over the man she loves, making her take on the haunting "I Don't Know How to Love Him" even more compelling.
Theater companies need to accept that JCS is a show too often revived. Audiences are likely to pass over the chance to see it, especially during holy weeks. Maybe that's why the Byham houses have been so bare. Do I hear an amen?