Jessica Hawkins breaks the law every time she gives her child her medical cannabis in Pa. and she has no intention of stopping | News | Pittsburgh | Pittsburgh City Paper

Jessica Hawkins breaks the law every time she gives her child her medical cannabis in Pa. and she has no intention of stopping

"It comes down to either going to jail or a funeral."

For many Americans, the days leading to the Fourth of July are uneventful. Maybe there's an extra trip to the grocery store or a bit of planning for a neighborhood gathering.

But in the Hawkins family, the week is filled with repeated warnings.

Every year, in early July, Jessica Hawkins cautions her young daughter Antania about the imminent "boom booms." For most, fireworks are enjoyable, but for Antania, they can trigger a series of intense seizures from which the child would require days to recover.

This year, however, 10-year-old Antania was expected to enjoy the holiday's quintessential activity, thanks to medicine she's not legally allowed to take, and to a combination of desperation and gall on the part of the tight-knit family who chooses to give it to her.

After trying about 20 FDA-approved drugs to prevent Antania's seizures, Hawkins and her mother, Nina Mitchell, took Antania and her brother, Lucciano, to Colorado in search of medical cannabis oil. In the past 18 months or so, anecdotal evidence has surfaced that the oil, extracted from a marijuana plant, can help children with crippling seizure disorders like Antania's. In Colorado, the medicine is legal. In Pennsylvania, at least for the time being, it is not.

Antania Hawkins experienced her first seizure at age six months. She was soon diagnosed with Dravet syndrome, a rare form of intractable epilepsy (seizures that can't be controlled by medication) that has slowed Antania's development, rendering her predominantly nonverbal and dependent upon a wheelchair. The condition is the result of a gene mutation that causes the child to experience hundreds of seizures each day.

"A splash of water, a dog barking, a doorbell, sunshine, pain — anything that could startle her," says Hawkins, enumerating Antania's seizure triggers.

Her seizures range in severity; some are indicated by the slight drop of her head and last several seconds. Others — grand mal seizures — cause Antania to fall to the floor, leaving her unresponsive for several minutes. "Her teeth are fake, because she's smashed her face so many times," Hawkins explains.

The South Hills family has vowed to exhaust any option that holds the slightest potential for relief. As a result, the Hawkins have traversed physical distances and experimental depths. Their resolve drove them to Miami Children's Brain Institute, and even to the realm of veterinary medicine, in order to explore the benefits of bromide, a sedative used to treat canine epilepsy.

Their efforts have largely left them disappointed. "[Antania's] been on over 19 FDA-approved different medications and she's allergic to nearly all of them. She's been on every diet possible. She's had every treatment you could possibly think of for epilepsy. They have failed," Hawkins explains. "We've looked above and beyond, under every rock that you could think of, for a possible solution."

This past fall, when the Hawkins' younger son began experiencing seizures, the family grew desperate.

"When Lucci started seizing in October," says Mitchell, "we were out of options." The family learned that Jessica's two-year-old son, Lucciano, also carries the gene mutation that causes his sister's intractable epilepsy.

That led the family to Colorado in December.

Prior to their trip, Hawkins and her mother had been in contact with Dr. Alan Shackelford, a medical-marijuana evaluation doctor in Denver. Under the care of the Harvard-trained physician, Antania obtained access to Remedy, a strain of cannabis in the form of an orally administered oil. She received six drops of Remedy under her tongue twice a day.

Remedy is high in cannabidiol (CBD), a chemical compound found in marijuana that is believed to have medical benefits, and is low in THC, the component responsible for cannabis' psychological effects.

Shackelford tells City Paper that "Dravet syndrome is characterized by an alteration in the way that sodium and potassium move across the cell membrane in nerve cells to convey information. CBD seems to correct [that alteration] to an extent."

Shackelford says identifying the most effective medication depends upon finding the proper strain of cannabis for each individual condition.

"The THC content depends on what it is in the original plant. It's not that you can easily adjust the THC or CBD content," he says.

After the trip, the family returned to their South Hills home with several week's worth of medication. They noticed changes in Antania almost immediately, and she improved with prolonged use of the oil.

"For the first time, she didn't have any seizures for four days. She got up out of her wheelchair and walked for the first time without falling," Hawkins explains. Despite having been unable to move her right side, "[Antania] lifted her arms up to hug me." Nina Mitchell gushes, "That was the greatest feeling." 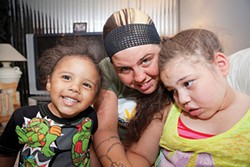 Antania's prolific progression became evident in her schoolwork as well. "She went from 25 percent of completing her work at school to 85 percent," explains Hawkins.

"She's not healed, she's not perfect, but she's better," Hawkins says. "We don't have the access here to what we need to get her to as perfect as possible." Thus, finding the most effective medication will require tinkering with the oil's THC and CBD content and, of course, the liberty to do such experimenting.

They returned to Colorado in February to procure a larger supply of the cannabis oil.

The sustained usage of the medication has given Antania's family the opportunity to finally get to know her. Her family members cherish the simple insights they were unable to gain during the first decade of the child's life.

"She loves music. My dad plays music for her. She sings, ‘I'm happy,'" says Mitchell lovingly. And sure enough, when "The Cha-Cha Slide" fills the living room of Antania's great-grandparent's home, the young girl smiles wide and raises both of her arms to dance. Antania is predominantly nonverbal, but since this winter, she has been able to construct simple sentences expressing wants, likes and dislikes.

"I dressed her in tutus and sparkles and sequins," Mitchell explains, "but she tells us she likes Spider-Man and the color blue."