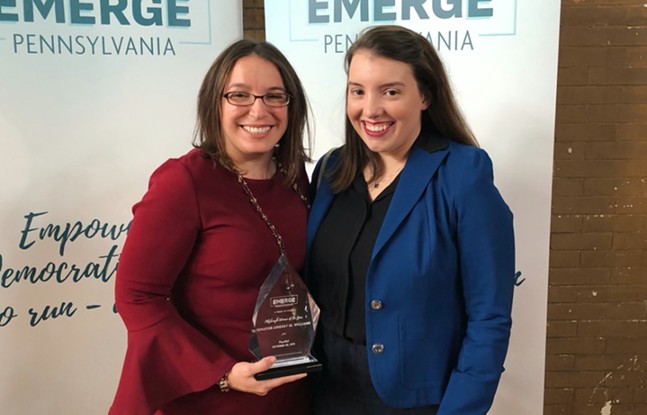 Photo courtesy the campaign
Jessica Benham (left) with state Sen. Lindsey Williams
State Rep. Harry Readshaw (D-Carrick) has served in his Pennsylvania House District 36 for more than 24 years. The district encompasses many of Pittsburgh’s Southern neighborhoods such as South Side, Allentown, Carrick, and Brookline. Readshaw has a very conservative record on social issues and even supports bills many Democrats oppose.

At times throughout his decades-long term, he has fought off more progressives challengers. And he continues to support bills aligned with conservative lawmakers, like co-sponsoring a bill that would ban abortions after a fetal heartbeat is detected, which is typically at six weeks into pregnancy and is often before women realize they are pregnant.

But this cycle, Readshaw is facing a Democratic primary challenger from the left, and she has recently notched five endorsements from local Democratic elected officials. Jessica Benham (D-South Side) announced her campaign in September and has been endorsed by former Pittsburgh City Councilor Natalia Rudiak (D-Carrick), Allegheny County Councilors-elect Liv Bennett (D-North Side) and Bethany Hallam (D-Ross), and Pittsburgh City Councilor Erika Strassburgher (D-Shadyside).

“I’m proud to endorse Jessica Benham,” said Williams in a statement. “Over the last few years, I’ve had the pleasure of watching Jess in action. She is active in a number of organizations and has been a vocal advocate for disability rights. It is hard to keep up with all that Jess does in her community.”

Williams flipped a Republican-controlled seat in 2018 and represents much of the North Hills.

Benham, who canvassed and supported Williams during her campaign, said she relates to Williams because both have been active in labor organizing.

“As someone who was illegally fired for union organizing, I have a deep respect for anyone who is trying to organize their workplace. Jess has been involved in the Pitt Grad Student organizing campaign with the United Steelworkers.”

Benham’s campaign has been focused on granting people health care that is free at the point of access, ensuring access to reproductive healthcare and increasing infrastructure funding for the district, especially concerning flood mitigation.

Even with the endorsements, Benham will likely need a good amount of support from less progressive voters, or follow Williams' strategy to victory in 2018.

While House District 36 lies mostly within the city, which is generally more progressive than other parts of Allegheny County, but the statehouse seat is home to voters that don’t share the same priorities as those in places like the East End. It tends to be more conservative on social issues and taxes, even if progressive on labor.

Much of House District 36 supported incumbent Allegheny County District Attorney Stephen Zappala (D-Fox Chapel) over a more progressive challenger in Lisa Middleman. The area also largely voted against the Pittsburgh Parks tax-increase, even as the rest of Pittsburgh largely supported it.


I know they are general elections and not Dem Primaries, but this map combined with DA race map indidicate a pretty big lift for state Rep candidate Jessica Benham against blue dog Dem Harry Readshaw in 2020. This area is anti-tax and pro Zappala. https://t.co/ZaGcFyXLpg