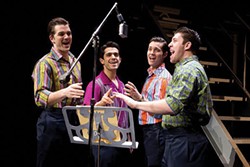 Big girls don’t cry. But at Saturday’s matinee of Jersey Boys, one apparently intoxicated big girl had big problems: She made so much noise, yelled and screamed and cried out the show’s dialogue and lyrics, that police hauled her out of the Benedum.

Ain’t that a shame.

Still, I couldn’t take my eyes off this PNC Broadway in Pittsburgh show. But not for the right reasons.

How Jersey Boys won the 2005 Tony for best musical is one of life’s unsolved mysteries. Yet people flock. Pittsburgh has now welcomed three touring productions within four years, and the musical seems to have gotten under most audiences’ skin.

Jersey Boys is a “jukebox musical”; it uses previously written material from a specific group, thus saving a fortune, and (usually) making it a fortune. Unlike Mamma Mia!, which employs Abba tunes to tell a new story, Jersey Boys narrates the ups and downs of Frankie Valli and the Four Seasons, as related by each performer in a selected “season.” There are cute cartoon backdrops by Michael Clark, deft direction by Des McAnuff and music by Bob Gaudio and Bob Crewe.

But while Jersey Boys is told by a cast imitating the group, the performers are so pedestrian they are interchangeable. Though Valli and his pals may have had hits, the music employs such cloying sounds that many of the songs sound the same, as well. And though signage warns the audience that the show uses “authentic, profane Jersey vocabulary,” even the f-word bores after its 657th use.

Oh, what a night. I did enjoy two things: learning that the song title “Big Girls Don’t Cry” came from a John Payne and Rhonda Fleming Western (Tennessee’s Partner), and that book authors Marshall Brickman and Rick Elice dramatized one true, poignant moment. When Valli learns that his 22-year-old daughter died of a drug overdose, a priest consoles him. “Don’t blame yourself,” the holy man says. “Who then?” asks Valli, a cardboard box of his daughter’s belongings in his arms.