While his motorcycle images capture a wild, sometimes dangerous subculture, his photos of Amish life might be better still. 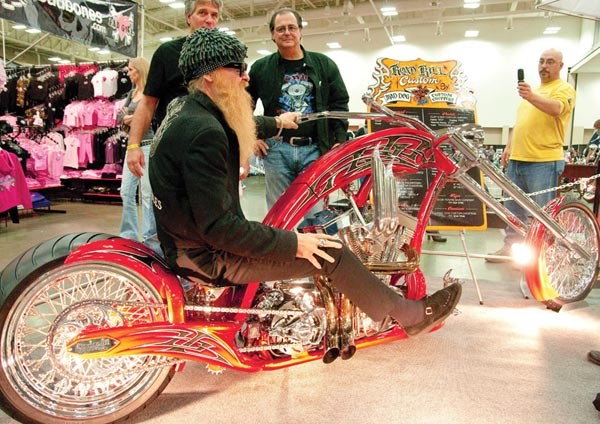 Jerry Irwin, Photographer is the unassuming title of one of two current exhibits at Space gallery. There's no hint that in his half-century career, Irwin, of Chester, Pa., has shot for the likes of National Geographic, Life and Sports Illustrated. But the range and commitment he brings to his specialties, including motorcycle culture, skydiving and Amish life, is impressive.

In this show, guest-curated by local collector Dennis Morgan, the unframed prints are simply pinned to the walls, but the variety of Irwin's motorcycle work alone is notable. He's covered everything from average joes with neat haircuts posing on their two-wheelers to rough customers wearing the colors of "Pagan's" and Hell's Angels. There are hippies, serious road-racers, vintage-bike enthusiasts, beer-gutted party guys — and one flamboyant fellow in fringe and assless chaps (with nothing on underneath), parading on a purple and chrome ride.

So Irwin loves his bikes, which take up most of this exhibit (even while the other half of the gallery is, somewhat awkwardly, devoted to American Darlings, a fine show by locally based painters Jonathan Chamberlain and Brian Brown). And the motorcycle images capture a wild, sometimes dangerous subculture. But Irwin's photos of Amish and Hutterite life might be better still. Joyful kids play in a full corn crib; an adolescent girl stands before her mirror; men at a barn-raising swarm over a huge wooden frame. There's a killer image of Amish guys paying "corner ball," with an adult getting ready to peg a youth with the hard little sphere.

Frustratingly, all of the Amish pictures are undated (just like most of the motorcycle photos). A date on the lovely, large-scale and seemingly timeless photo of horse-drawn carriages lined up on a snowy lane would have been nice. Still, eras are suggested, as in a charming portrait of three Hutterite women in headscarves, plainly cut but fancily patterned clothes and modishly tinted '70s-style eyeglasses, behind their produce table.

Nonetheless, the coolest wall in Irwin's show might be an unthemed array, depicting everything from a a tattooed Pittsburgh fishmonger to a boy riding a camel outside the Taj Mahal, and from ZZ Topster Billy Gibbons to horse-logging in snowy Vermont woods. It's a testimony to a life lived in pictures, and everywhere. There's even a self-portrait of Irwin, shot head-on, cruising a highway on his motorcycle.