Jenn Wertz is ready to take 'em as they come

The day Jenn Wertz turned 18, she moved with a friend to California to seek adventures they couldn't find in their hometown of Greensburg, Pa.

Renting a studio apartment in a house in Hollywood that once belonged to actor Rudolph Valentino, Wertz found a job at a Los Angeles art supply store. “It was so weird. There were perverts and weirdos, everybody was tripped out on drugs,” she says. “There were a lot of street kids, kids who came from small towns everywhere like us.”

It was the mid-1980s. In addition to the hair bands and their followers in “skintight rayon pants and leopard prints," the club scene was dominated by groups such as Guns N’ Roses and the Red Hot Chili Peppers. Wertz — who gravitated to the rawer, more visceral sounds of rock bands — immersed herself in the music, the style, the spirit of the times.

After recently turning 50, those experiences are re-emerging in her music and art.

Wertz — possibly best known as an original member of Rusted Root — is releasing a new album on March 1, Take ‘Em as They Come, and re-visiting her paintings that recall the works of Frida Kahlo and Marc Chagall. She has a thriving Instagram resale shop (@sweet_theads_wertzy) and has written a book about her life that mixes fact and fiction. She's also a single mom who works part-time for Mookshi, a wellness center in Regent Square, and for the sculptor James Simon.

After years of being associated with Rusted Root, Wertz is finally stepping out of the band’s shadow. “It’s a blessing and a curse in a town like this,” says Wertz of being linked to the band. “Rusted Root, for some people, can invoke a love or hate response.” 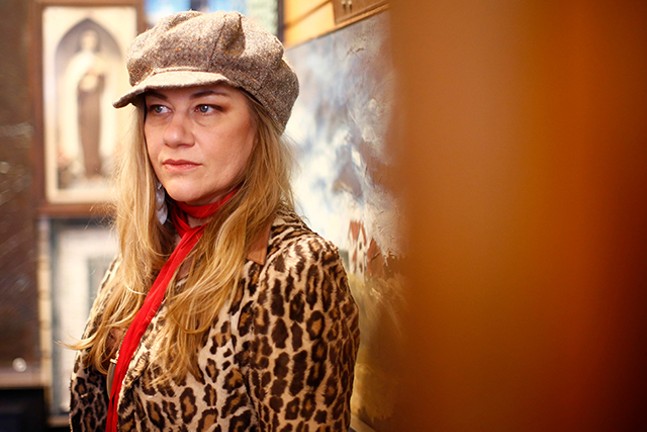 Recorded at The Church Recording Studio in Overbrook and co-produced with Dana Cannone, Take ‘Em as They Come is a tour de force of imagination and a yearlong adventure. Working with Jim Donovan of the Sun King Warriors, Rob James of the Clarks, Josh Verbanets of Meeting of Important People, Gary Musisko, Sarah Siplak, Korel Tunador, and Randy Baumann, Canonne counseled Wertz to take a patient approach to recording.

“If you take something like we had, a piece of clay, and beat it into submission, when you’re done you have a Picasso with a wonky nose and crooked lips and a weird eyeball and it all sounds OK,” Cannone says. “But instead we sat with the musicians a little longer, worked a little longer, and developed the initial idea: this is what we captured, we have to do something with it.”

Musically, Wertz seems to be channeling the Southern California sound she fell in love with when  she moved to Los Angeles years ago. Think of 1970s recordings by Linda Ronstadt, Neil Young, or Warren Zevon as a starting point. But Wertz’s gritty vocals are backed by an eclectic, sometimes dreamy mix that defies categorization.

Donovan, who performed with Wertz in Rusted Root, says he’s been hearing snippets of these songs for almost 20 years, “in all their incarnations. Jenn’s got her own thing, her own way of thinking about phrasing and singing. She’s very clear on what kind of sound she wants. It’s not just the song, it’s all the sonic qualities of each tone, of each instrument.”

Wertz’s previous forays into music include the bands Lovechild and Isabella, groups that hinted at her talents but didn’t fully capture the breadth of her interests. She thinks Isabella especially was a promising venture, but music and other artistic pursuits were temporarily stalled by the birth of her son, Gibson Musisko. The 14-year-old is now a budding musician in his own right. He sings on Wertz’s album and has his own band, The Allies.

“I’m not speaking just as a mom, but as a parent,” Wertz says. “I have male friends, creative people, visual artists, and writers, but more so as a performer, things change. If you want to be a present parent and a good co-parent and a reciprocal co-parent, going out and playing shows has to change when a baby comes into the picture. But now my baby is 14, and I can go out and play.”

Wertz admits than when she stopped touring with Rusted Root in 2007, she felt lost. It took time to reignite her creative itch. Unable to play guitar at home when Gibson was sleeping, Wertz started taking abstract photographs on their walks. Those images, at the urging of Scott Kramer, her friend and the owner of the recently closed Beehive on the South Side, became paintings that were exhibited in 2009 at Mendelson Gallery in Shadyside.

“I sold every piece,” she says. “That started me doing art again.”

At her 50th birthday party, one of Wertz’s friends from high school gave her a box. Inside was a painting of the Rolling Stones’ Keith Richards that Wertz had done when she was only 16.

The painting, forgotten for more than three decades, caused Wertz to rethink her art and to consider realism as a palette for future works.

But no matter what Wertz decides to do — in art, music, or any other creative endeavor she chooses to pursue — it will be a “reflection of who she is, her personality,” Donovan says.

“She’s not your typical bird. She’s got her own background, her own way of seeing things. It’s apparent in her music, and I love that part of her.”

Take ‘Em as They Come is available March 1 on iTunes, Spotify, and Amazon