Jenesis Magazine reps Pittsburgh while expanding into the national market

"When everybody thinks of Jenesis, they say, 'Oh, Jenesis, from Pittsburgh.'" 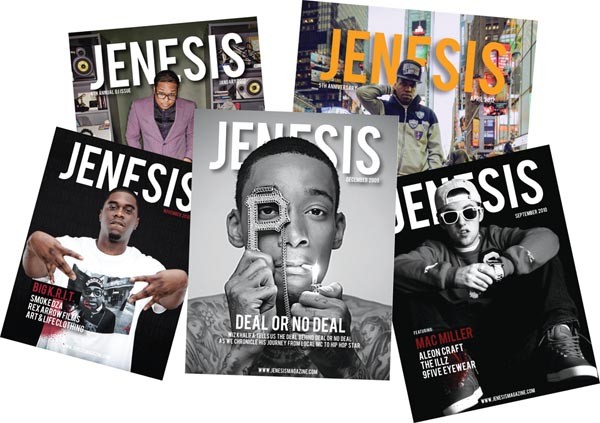 Jenesis covers have featured artists from Mac Miller and Wiz Khalifa to Big K.R.I.T. and Curren$y.

Jenesis wasn't originally supposed to be a magazine at all.

"I had an idea going for a clothing line called Jenesis," explains Taylor Allderdice grad and Jenesis co-founder Brian Tolbert. "When I was at the Art Institute [of Pittsburgh], a cousin of mine had an idea for a newsletter he wanted to put together for Detroit. I got excited about the idea, and I wrote out all of these ideas for columns and features, and he kind of flaked on the idea. So I had these two separate ideas, and I combined them, because I didn't have any money at the time to do a clothing line."

"I was being kind of nosy," Agnew explains. "And I started seeing some of the scribblings he had, some of the writing he put together, and he had some stuff about Jenesis the clothing brand. He had the idea of doing a magazine too, but he didn't have a partner who could help him out with it."

Nearing the end of his time at AIP and preparing for life as a graphic designer, Agnew saw an opportunity. "I didn't want to work for a corporation," he says. "I just wanted to do what I wanted to do. And once [the idea for the magazine] arrived, we just started working on it, real heavy."

Now the publication — an online magazine with issues published as high-quality PDF files — is celebrating its fifth anniversary. Over the years, the magazine (at www.jenesismagazine.com) has made a name for itself by keeping up with the national scene while giving props to the Pittsburgh community in which it got its start.

Jenesis has a number of regular features: "Unknown Known," for example, which is a monthly interview with an up-and-coming musician who's not yet well known. Issues normally include free mixtape downloads, and a section called "Be Awear" features stories on clothing lines. Point Park University grad Jordan Beckham is the publication's main photographer.

At first, Agnew says, he and Tolbert thought of pushing the publication as a print magazine, but overhead costs and the downhill slide of print media discouraged them. They chose to pursue the magazine as an online publication, but one that would be different from most web mags in that issues would come out in the PDF format and readers could page through as if it were a print publication.

"It was one of the first magazines that you could read online like that that I knew of," says DJ Bonics, the former KISS FM personality who now tours as Wiz Khalifa's DJ. "It's deeper than just a regular blog."

"Especially now, everybody has a blog, everybody has a website," says Tolbert. "Not to take away from what others are doing, but at the end of the day, our original vision was a magazine. And regardless of how you get that across, it's still a magazine."

The magazine's staff has expanded and spread out geographically — Agnew is now living in the Dallas-Fort Worth area, writer J.J. Parker is in Los Angeles — but Jenesis still strikes a balance between being a publication of national interest and promoting Pittsburgh acts. It's something of a hybrid, a national-level magazine with a regional focus. Many of the main contributors, like Tolbert and writer J.D. Thrasher, still reside in Pittsburgh.

"When everybody thinks of Jenesis Magazine, they say, ‘Oh, Jenesis, from Pittsburgh,' because that's where we started," says Agnew. "There probably will never be a time when people won't associate Jenesis with Pittsburgh. Pittsburgh has a lot to offer, and I think by spotlighting that, it not only gives a spotlight to Pittsburgh artists, [but] it's good for outsiders who want to learn about Pittsburgh.

"Before Wiz and Mac, no one really knew much — even the local media wasn't doing a lot with regard to hip hop, so we took it upon ourselves to shine a light."

Jenesis takes credit for being the first publication to put Mac Miller on its cover, which it did in 2009. "It was similar to how XXL does its "freshmen" cover," explains Agnew. "We had Jasiri X, Mac and a couple of other artists on there. I think this was around the time he changed his name to Mac Miller. We had coverage on him well before a lot of other people did." Miller graced the cover by himself in September 2010. Recently, DJ Bonics was on the cover of the 2012 DJ issue, for which print copies were available to order.

"It's a good piece of my own history," Bonics says. "It's much cooler than just being featured on another website — being on the cover of something like this is different."

The magazine's anniversary party at Shadow Lounge is a showcase of "Pittsburgh's next top five," featuring local up-and-comers like Beedie and Devin Miles. While Jenesis has become bigger than just a local website — the fifth anniversary issue features Curren$y on its cover — the people behind it remain true to their city.