If you've ever seen a guy loitering in a bustling museum with some stereo mics and a laptop, you may already be in Jeffrey M. Robinson's work. Last year, he visited museums in Europe and the U.S., including The Andy Warhol Museum, projecting droning audio tones into spaces and re-recording them onto his laptop. He calls the results "sound templates."

"What I'm doing is just capturing the unique acoustic signature of the space," Robinson says. "You take the results of those -- you have like six hours worth of this stuff -- and the goal is to cut it down to about 20 minutes of the most interesting sounds. I mean, it's certainly not for everybody!" He laughs. "You know -- it's for me!"

These sessions were originally intended to generate materials for an upcoming sound installation at Chicago's Lincoln Park Conservatory ... but then things started to get interesting.

Now, Robinson returns to the Warhol to, in his words, "deconstruct that recording in a live setting with a visual accompaniment." Aiding him is a collection of noteworthy avant-garde musicians: former U.S. Maple members Mark Shippy and Pat Samson, as well as Matthew Carson and former Jesus Lizard vocalist David Yow.

"I got to know Jeffrey while he was here last year making the recording, and he mentioned then that it could ideally result in a performance," says Ben Harrison, the Warhol's associate curator for performance. "He got back in touch with me about six months ago and mentioned his collaboration with the U.S. Maple and Jesus Lizard guys and sketched out the idea for the performance, which is a bit different than the usual staged show in the theater," Harrison says. "It's an intriguing idea and I'm just curious to see how it comes together."

The performance, Robinson says, will start with templates he recorded at the Centre Pompidou, in Paris, and in the Metropolitan Museum of Modern Art, in New York City, accompanied by saturated collage projections from Sacramento-based artist John Seden. Then the musicians will perform along with the template recorded in May at the Warhol, a prospect Robinson clearly relishes.

"U.S. Maple just blew me away the first time I heard them," he enthuses. In working with the musicians, Robinson hopes to take artists who already work on the fringes of music and "to have these guys collaborate, have them cross the line to this other side, [into] this art project. 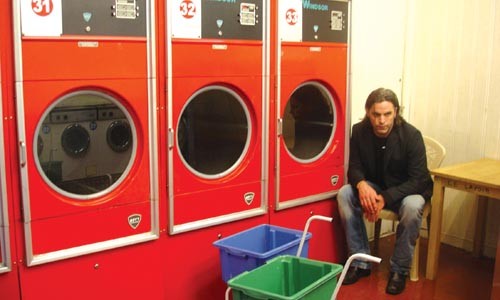