Of all the saxophonists who rose to prominence in the 1960s under the banner of the "New Thing" -- alternately considered free jazz, avant garde and other less-flattering names -- tenor man Pharoah Sanders might be the most searing. In his work with John Coltrane's later, more exploratory quintet, Sanders picked up on his leader's energy and channeled it into raw emotion, emotion often expressed in high screams and gravelly overtones.

This approach continued through the albums Sanders recorded as a leader after Coltrane's death. But on those recordings, Sanders frequently balanced raw power with more serene grooves and African instruments, pre-dating world-beat music and capturing the quest for peace during that turbulent era.

In the ensuing years, Sanders, who recently turned 70, has worked in a variety of settings: disco; a straight-ahead session with Coltrane alum McCoy Tyner and Elvin Jones; and several projects with New York bassist and composer Bill Laswell.

When he comes to town this Sat., Nov. 13 -- his first Pittsburgh performance in 28 years -- Sanders will bring longtime collaborator pianist William Henderson. Pittsburghers Dwayne Dolphin (bass) and Roger Humphries (drums) fill out the band. The saxophonist has no qualms about getting up and playing with new people, as long as the mood is right and everyone listens to each other. "We'll just get together and start playing," he says. "I might just call a key: F-sharp minor, and that's it. Everybody just blows. It'll always be right."

Originally from Arkansas, Sanders moved to New York in 1961, when jazz was transitioning from its harmonic and rhythmic conventions toward something loose and free. John Coltrane was considered one of the most gifted and revered tenor saxophonists of that time, and his continual quest for new horizons lead him into this terrain.

Speaking over the phone, Sanders doesn't go into great detail about his own approach to music, but he opens up when discussing his former bandleader. Coltrane, he says, worked constantly to improve his technical ideas and frequently disappeared between sets at a club -- sometimes going home -- to refine a musical idea. It also meant that Coltrane often arrived late for a set. One night, the owner of Los Angeles' It Club insisted Sanders start the set without Coltrane, who was nowhere to be found.

"I started playing a little riff. All of a sudden, here comes John, taking his coat off and unpacking his horn," he says. "He got up on the bandstand and he starts playing the little old riff that I was playing. Then he added something to it that made it better than what I was playing. That's the kind of person he was. He'd always find a way to get better. He spent all his time on inventions and playing all over the horn."

Stories abound about Coltrane standing onstage, beating his chest and yelling because he wasn't sure what else to do to express his energy. Sanders confirms these stories, but brushes off the idea that Coltrane didn't know where to go. "We just opened up the spirit to a higher level," he says. "I'd take the neck off my saxophone and blow it. Really, you never know what you might do."

His two years as Coltrane's tenor foil offered a lifetime of experience that might be hard to top, but Sanders was just beginning. His best-known album, 1969's Karma, featured just two songs, one of them the 32-minute "The Creator Has a Master Plan," an edited version of which became a crossover FM hit.

"The Creator Has a Master Plan" begins with an out-of-tempo passage marked by soulful tenor wails, then the nine-piece ensemble locks into a hypnotic two-chord groove that balances gritty, spiritual horn work and unique vocals by the late Leon Thomas. Thomas sings in a style similar to yodeling called umbo weti, which originated with central African pygmies. Initially jarring, Thomas' high baritone has an intriguing appeal, as he repeats variations on the title followed by the phrase, "peace and happiness to every man."

Looking back at his vast musical experiences, Sanders sees it all as one gigantic performance. "I look at it as one big solo," he says. "That way you don't have a chance to repeat yourself." 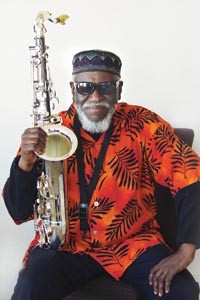