Jay D. Aronson’s new book Who Owns the Dead?: The Science and Politics of Death at Ground Zero explores the ethical frontiers of DNA identification of bodily remains

“I tend to side with some of the people who are not overly interested in recovering remains.” 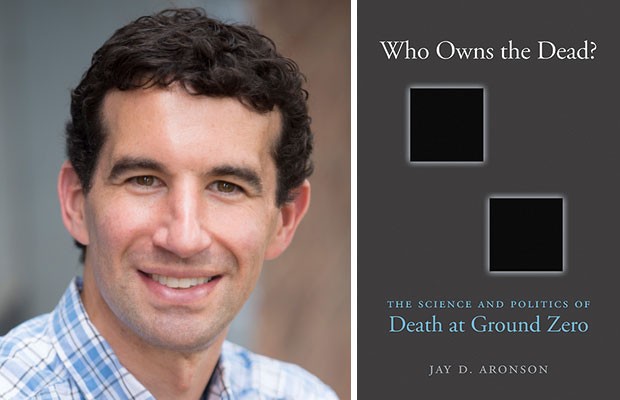 Author and Carnegie Mellon professor Jay D. Aronson
After Sept. 11, 2001, New York City had to process the largest crime scene in American history. The medical examiner’s office used new DNA science to identify bodily remains amidst the rubble. In his new book, Who Owns the Dead?: The Science and Politics of Death at Ground Zero (Harvard University Press), Carnegie Mellon University associate professor of science, technology and society Jay D. Aronson chronicled the effort, its complex symbolic significance and the burdensome promises around it.

“The recovery, identification and memorialization of the victims of the Sept. 11 World Trade Center attacks brought science to bear on questions of identity, politics and memory,” wrote Aronson, director of CMU’s Center for Human Rights Science. “The promise of identifying human remains through genetic technologies has fundamentally altered the way we will memorialize the dead in the future. These changes are not unambiguously good.”

What advances in DNA science were used to identify the remains?

There were advances in DNA science, but the real advances were in the extraction of DNA from damaged bones and the statistical techniques you need to use to match partial DNA sequences to familial samples. For many victims, there was not a direct sample. There wasn’t a complete DNA profile. Sometimes, they were able to get it from toothbrushes or blood samples that maybe a doctor had. They were often taking samples from family members who were not complete matches. Half of the parent’s DNA would match their DNA. You might have brothers and cousins and distant relatives. … Many of the DNA-identification techniques had been developed in the context of the criminal-justice system and other humanitarian efforts.

You wrote that the DNA identification process was a “double-edged sword” that allowed some families to receive the remains of their loved one but left the city with promises it couldn’t fulfill and a never-ending responsibility.

I think the real danger comes when we don’t set any limits on the identification effort. When you look at something like a plane crash or other types of accidents, there is a sense that you want to do your best with the resources that you have and the time that you have to identify as many of the remains as possible, of course. The primary goal is to find that everyone who was on that manifest or list of potential people in the accident, to find an actual part of them to confirm that they were in that plane or on that vehicle. … A major issue with the World Trade Center recovery effort is that the medical examiner promised to continue with this effort in perpetuity, that there would be no end point, and I think that creates a lot of problems for the people involved because that means that those remains can’t be put to rest, they have to be contained under scientifically accessible conditions, in a repository for re-testing as technology improves.

Having written this book, what would you want if you lost someone in an attack like this?

I tend to side with some of the people who are not overly interested in recovering remains. If I knew my loved one was in the attack, was in the building for sure, I don’t think I would need the physical proof. … One thing I realized when I did this research is that there was no “normal” response. There’s no right or wrong answer to the question of “What should you want?”

Let’s say, tragically, there was an attack like 9/11 and officials where it happened called and asked, “What can we learn from what New York did?” What would you say?

The other thing I would say is, “Hold off on memorialization for a number of years.” Make sure you create temporary memorials that are heartfelt, that are not tacky or kitschy, that give people the space to mourn, but hold off on the permanent memorial until you know what the situation means historically.