Jason Moran & The Bandwagon perform at the Kelly-Strayhorn Sat., March 3 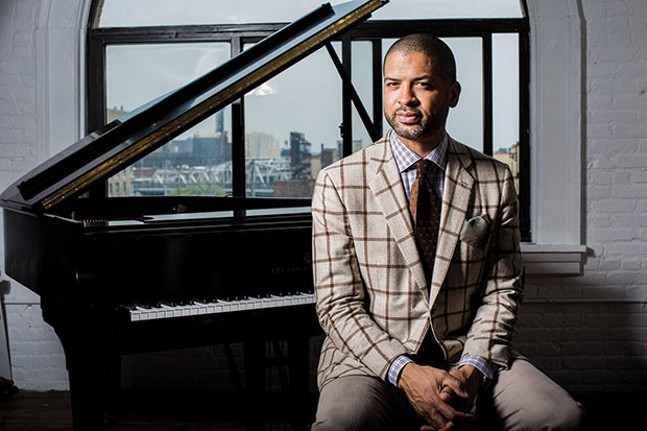 Jason Moran said recently that half of his life consists of talking about and playing music, while the other half is spent looking at other representations of jazz that have shaped the way he works as a musician. The latter half came up during a conversation about his work at the John F. Kennedy Center for the Performing Arts. As artistic director for jazz at the esteemed Washington, D.C., institution since 2011, Moran developed some installations that recreated legendary clubs, like the Savoy Ballroom and the Three Deuces, from the early days of New York jazz.

These locations were just as significant as the music performed there and the people who played it. “When will America think about its relationship to space — about where it happens?” he asked rhetorically in a JazzTimes interview.

While the pianist is committed to honoring jazz’s history, the first half of his personality also makes sure that the music is anything but a museum piece. For example, in 2015, he presented the most unique cross-discipline jazz concert outside of the Kennedy Center digs, when his Bandwagon trio was joined by a fleet of professional skateboarders, who skated a bowl built for the event. If it sounds like an odd pairing, Moran doesn’t think so. Growing up in Houston, he saw skate culture firsthand. “I know that skaters who designed skate videos and skateboards, their relationship to a kind of underground culture is the same thing that jazz musicians [have],” he told JazzTimes. “Those conversations are so similar that I want to help make them a part of how each side thinks about the other.”

Within his own music, Moran also utilizes a mix of concepts. All Rise: A Joyful Tribute for Fats Waller honored the stride pianist/vocalist by casting Waller’s songs in a more contemporary turn that still maintained the enthusiasm of the original 1940s works. More recently, he released three digital albums on Yes, the label he operates with his wife. Mass {Howl, eon} was created in tandem with painter Julie Mehretu, who took to the canvas while Moran took to the keys, creating a Catholic Mass marked by electric piano and electronics.

BANGS features him joining forces with trumpeter Ron Miles and guitarist Mary Halvorson (who comes to The Andy Warhol Museum next week). Thanksgiving at the Vanguard features the group that comes to Pittsburgh this week: the 18-year-old Bandwagon trio, with bassist Tarus Mateen and drummer Nasheet Waits. Rarely does a jazz group have the ability to maintain musical rapport for that long. But here, each player both supports or pushes each other, adding subtle variations that drive tracks like “Gangsterism at the Vanguard,” an update on a signature Moran composition. All three albums show how Moran, who recorded for the esteemed Blue Note label since 1999, continues to grow as an artist as well as an artistic director. “People of my generation … [have] realized what the music has meant to us and we realize that we’re those people [shaping jazz’s culture and history] now,” he said in JazzTimes. “A certain age, a certain dedication, a certain standard. That’s where I’m at.”