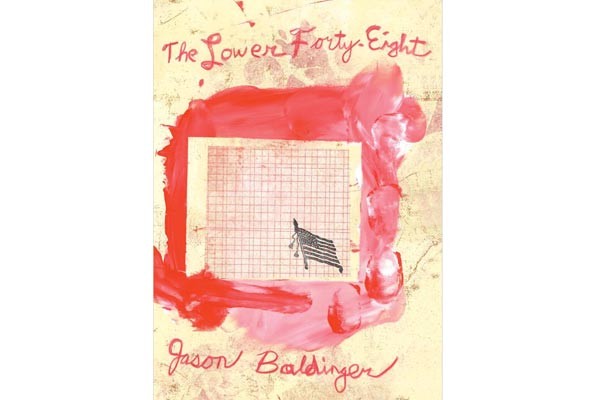 While the long literary tradition of wanderlust spans from Gilgamesh and The Odyssey to On the Road and beyond, the journey typically finishes with the hero's transformation. The speaker in Jason Baldinger's newest poetry collection, The Lower Forty-Eight (Six Gallery Press), usually ends up in a bar. Even so, the book employs its down-to-earth tone honestly as the reader follows along on a ride that touches all of the continental U.S.

Baldinger, a Pittsburgh resident and itinerant worker of odd jobs, is plainspoken in these poems, blending aspects of reportage, ode and elegy into 109 pages imbued with the ghost of a restless Kerouac. And while he pays respect to the Beats, there is something universal about the road-trip adventure touched upon here: boredom, unexpected thrills and friendship. The Lower Forty-Eight is more than homage, though, as he references this country's troubled history through mentions of abolitionist John Brown, Civil War battles and the Indian Trail of Tears.

This is best represented in "Another Stupid Fucking White Man," when Baldinger writes, "At Wounded Knee, / Pine Ridge Reservation has bled more than once. / Red Cloud's grandchildren burn sage, prepare for ceremony. / I am out of place. / Another stupid fucking white man amazed by walls / painted in history, / steeped in the blood / of the American Indian Movement." It's a reminder that for all the invocations of tourist traps and roadside markers, this nation's past is so often molded from tragedy and ignorance. Baldinger's straightforwardness makes no attempt to excuse horrific events.

Travel can also be reductionist, distilling life to basic human needs: food, drink and recreation. The theme echoes throughout the The Lower Forty-Eight, best summed up in "These Days of Heaven": "In Bradenton, it's a typical night. / Redneck princesses in high heels and Daisy Dukes / serve Cuban sandwiches in dive delis. / Everyone drinks Highlife on picnic benches outside. / Across the street, a ballgame, / prayers accompany first pitch. Star-Spangled Banner. / Home team loss followed by fireworks."  It's a quintessential portrait he balances by later asking, "You have found America, / now can you find your soul?" It's a complicated inquiry our society perhaps too often tries to resolve through patriotism or crass commercialism.

While Baldinger's lines sometimes lack compression and musicality, The Lower Forty-Eight embraces the trials of travel and the necessary questions that follow.