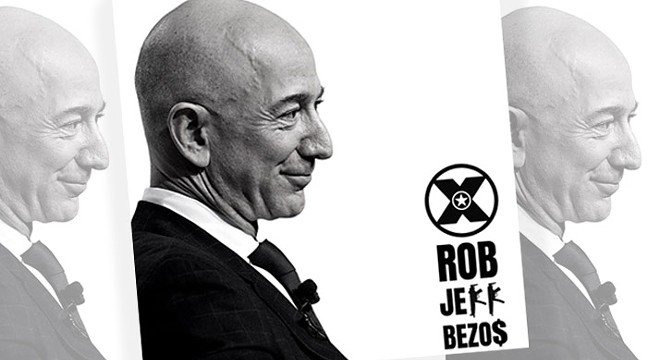 Jasiri X's "Rob Jeff Bezo$"
During a time when activism continues to rise, Pittsburgh artist Jasiri X is using his music as a platform against racial inequality, protesting the increasing gap between the wealthy and those struggling in poverty with his newest single, “Rob Jeff Bezo$.”

The activist, and co-founder of local arts and social justice collective 1Hood Media, released his latest single last month on Black Friday. This release date was no coincidence for a song filled with powerful words about making a change in this money hungry world. The song specifically criticizes Jeff Bezos, CEO of Amazon and currently the richest person in the world.

“Black Friday is the biggest shopping day of the year, so it made sense for me to use it as a conversation of how while so many people are falling into poverty, Bezos could become the world's first trillionaire,” says Jasiri. “It's also the five year anniversary of my last album, Black Liberation Theology.”

The song is carried like a spoken heart-to-heart about the state of the world today. The consistent beat and repetitive guitar melody allow the lyrics of the song to really stand out and make an impact by not distracting the listener. The mellow sounds contrast brilliantly over heavy lyrics such as, “I can’t make it any plainer / You gonna pay us for our labor / I don’t need no white savior just to find my behavior.”

For Jasiri, the release is much more than a song. It’s a callout for change for the good of all people, not just those in higher sectors. This callout isn’t something that’s new for the artist, either. He has a past of calling out unfair corporations in past projects as well.

“I did a song in 2012 called ‘Candidates for Sale’ about the Citizens United ruling that let corporations be listed as people and give unlimited donations to politicians,” says Jasiri. “I also addressed it on my last project on a song called ‘New Nat Turners’ which was one of my most popular tracks. It's probably why I'm independent.”

The single itself was produced by Blak Czer who has worked with many big names in the hip-hop industry including Dr. Dre. This made the single all the more special for Jasiri who says he was able to spill out his thoughts. The past year has been filled with events that cause him to rack his brain, leading to the creation of this song.

“For me, it represents all the things I wanted to say in this moment about the loss of Black lives, the pandemic, the ever-increasing wealth gap,” he says. “I felt like I was able to do that all in this song.”

“Rob Jeff Bezo$” is truly an anthem for those who are ready to stand up and fight for the equality that this world needs. It’s a song filled with raw emotions, screaming out all the problems of the world today. The smooth flow and increasing tempo of Jasiri’s voice throughout the song presents his message in an understandable and urgent way, which is how, he says, he intended his message to be.

“I want to get across the urgency to make a real change in this world,” says Jasiri. “These last few months have laid bare the systemic racism and inequalities in all these systems. Going back to normal for us would mean our continuing exploration and oppression. We need to make radical changes for the good of all people before this whole thing collapses on top of us.”