“I hate it when songs all sound the same,” says Michelle Zauner 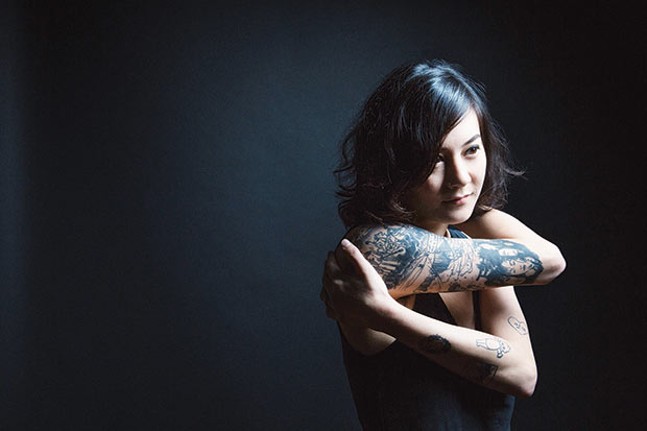 “I’m at the point where the shows we’re playing and the response we’ve received is just so far from what I could’ve imagined from myself,” she says.

It’s been nearly a year since Zauner quickly followed her 2016 debut Psychopomp with the brilliant Soft Sounds From Another Planet. It was Planet songs furthest from Pscyhopomp’s hit (pearly rocker “Everybody Wants To Love You”) that caught the most wind.

Lead single “Machinist” is a synth-based space odyssey that features robotic auto-tuning and a throbbing dance rhythm. Trip-hoppy “Road Head” is both the record’s poppiest track and the second-most outlier in the discography of J Brekkie — this project’s colloquial name. Having amassed millions of Spotify streams, J Brekkie is in a tier similar to current indie stars Car Seat Headrest and Mitski.

Its gigs are proof that popularity is measured in more than just streaming numbers.

“We played Union Transfer last night, which is this 1,200-[capacity] venue in [Philadelphia],” Zauner says. “And the biggest kicker is, four years ago I worked the coat check there. So, it’s really this full-circle thing.

“We also played a show at the Crystal Ballroom in Portland, which is where I used to see shows as a kid. Built to Spill was one of my first shows there. Death Cab For Cutie [too]. So, to play that stage was a huge deal to me.”

Few artists blend styles as seamlessly and effectively as Zauner, which makes constructing a setlist as painstaking as it is exciting for her.

“The first act is the really synthy, bass-in-your-face type stuff. The second act is the straightforward rockers. Then the quiet songs, the heart rippers … It’s tricky, I’m really fussy about the setlist. It’s a very careful kind of equation.

“I hate it when songs all sound the same. I’m glad we get to experiment with something different.”