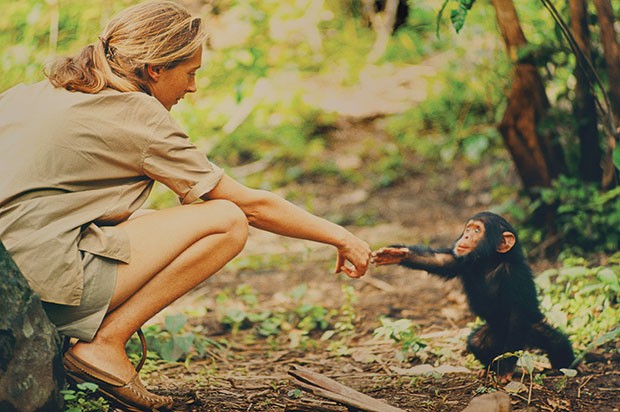 Most people know Jane Goodall for her lifelong work studying chimpanzees in Africa, but Brett Morgen’s new biographical documentary Jane relates the quite fascinating story of how the young British woman came to the job six decades ago, and how remarkably her life unfolded from there.

Goodall was a 26-year-old secretary with no scientific degree or training, and that was precisely why she was chosen for the project: to watch chimp behavior in the wild with no preconceived ideas or bias. Once encamped in Gombe, Tanzania, Goodall was determined “to get close to the chimpanzees, to live among them, to get accepted.

Goodall narrates the film, which makes fantastic use of gorgeous color photography shot by renowned nature documentarian Hugo van Lawick, in the early 1960s. (The film incorporates material from 100 hours of film previously thought to be lost.) From sweeping vistas of verdant jungle and close-ups of colorful insects, to mischievous antics of both man and ape around camp, the footage conveys a keen eye for an appreciation of the natural world. (Van Lawick and Goodall later married, and van Lawick’s affection for Goodall appears evident in his “routine” depictions of her scientific studies; the camera literally loves her.)

The footage shows Goodall in all her determined and patient splendor — clambering up trees and hills, peering through binoculars, dutifully keeping notebooks of charts and sketches. All the low-tech work of sitting and watching pays off: Goodall discovers that the chimps make and utilize tools (for eating insects), the discovery continues the funding for the camp; and her life’s work is begun.

Jane would make a good companion piece to 2015’s hit Hidden Figures. Like Goodall herself, the film is a gentle but firm account of a woman succeeding in a man’s world; of being diminished for her gender (the mid-century media often described her as a “girl” or wrote about her legs); and of having to find a balance between family and career. There were struggles, surely, but how it was worth it for the young woman who lived her dream of being the “strange white ape” among chimps.