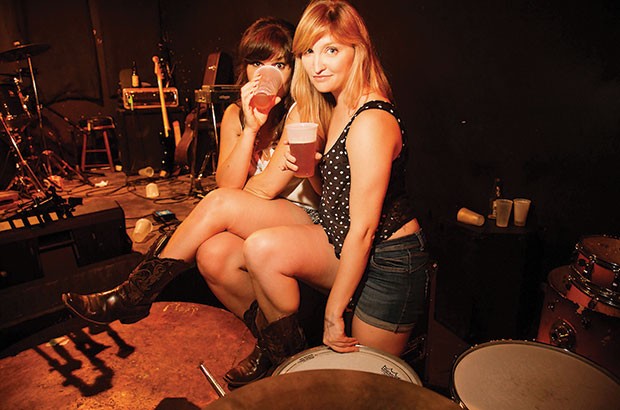 Fri., March 31-Sun., April 2. Various venues. $10-20. burningbridgesfestival.com
This weekend, Pittsburgh welcomes the second annual Burning Bridges Comedy Festival. Organizer John Dick Winters promises an even more accessible event, with even bigger performances. Headliners include James Adomian, the elastic impressionist known for his appearances on Comedy Bang! Bang! and The Late Late Show With Craig Ferguson, and Aparna Nancherla, the acerbic comic from Conan and Inside Amy Schumer who has more than 150,000 Twitter followers.

The festival is presented by Race to the Coffin Comedy and The Epicast Network. Pittsburgh-based comic Winters chuckles at hearing the word “diversity” used to describe the lineup, which features nearly four dozen comedians, male and female, local and national, and from different backgrounds. “Yeah, diversity is a weird word,” he says.

Katy Frame, the accordion player, says that song is one of their best. “I’m yelling the word ‘masturbating’ on the street! I don’t think it’s something you should be ashamed of,” she says by phone from their home base, in Brooklyn. “In high school, we played a game of truth-or-dare, and this girl admitted that she masturbated 11 times a week. And I was like, ‘Oh, my God! I’m doing great, I’m not hitting eleven times a week.’ So that really helped me.” Marie Anderson, who plays ukulele, adds, “That’s the only song my parents ask, ‘Can you please not play that bear song?’ It’s amazing how shameful that can be for people. But that’s why we sing it. It’s a sweet song!”

Reformed Whores headlines the festival’s closing night, at Club Café. Like last year, Burning Bridges uses multiple venues around the area: Arcade Comedy Theater, Downtown; Club Café, on the South Side; the newly opened Unplanned Comedy Warehouse, in Lawrenceville; Mr. Smalls, in Millvale; Comtra Theater, in the North Hills; and Hambone’s, in Lawrenceville, the only venue where all the performances will be free.

Worth checking out: local true-crime podcast Give Me Murder or Give Me Death