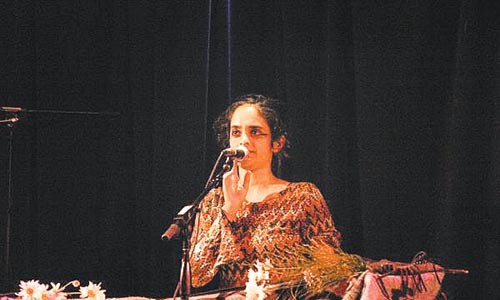 A syrupy upright bass line oozes into the chinks of a slow, polyrhythmic groove. A piano picks out a jazz-flavored motif alongside an oddly archaic sound: the pure tones of a Celtic harp. Restless, shape-shifting female vocals swim to the surface, then back to the depths again.

While the Brooklyn-based Jaggery's "darkwave jazz art-rock" is a smooth, subtle sound, it's not exactly what you'd call peaceful. But it is, in fact, therapeutic.

"I had a really rough early 20s," says Jaggery's Mali Sastri, "and it was at that time that I discovered 'voice-moment therapy.'" In the late 1990s, an injury had forced her to leave a dance program, and a friend steered her toward one of very few voice-movement therapy practitioners in the United States.

"It's an expressive arts therapy," says Sastri. "It's not highly technical; it's a very emotional and psychological use of the voice. Using the voice for healing, and a holistic view of vocal expression." She eventually moved to the U.K., spending two years in a more extensive program.

That experience and training comes out in a couple of distinct ways on Jaggery's debut full-length, the self-released Polyhymnia. First, there's Sastri's highly stylized sound, which veers from full-throated accusations to high mystical whispers. And then there's her lyrics.

"Some of them came directly out of some of the therapeutic work that I've done," Sastri says. "It's always easier to write songs from a depressed place, a dark and down place, for me," she admits, "and a lot of the songs have come directly from experiences of grief or pain or sorrow."

But that doesn't mean she can't throw in a song about a dog with a whimsical name ("Elfin Arrietty") or a song with surprisingly Yeatsian imagery, such as "Spiral Staircase." That song, Sastri says, concerns "when you feel like 'Oh, I'm back in the same place I was. Time has passed, and I've thought that I've grown and changed and worked on changing old habits and here I am again.' It's a different way of looking at that, as though you're on a spiral staircase. There is growth: You're coming back to the same place, but from a different perspective, a different height."

For Jaggery's first real tour, harpist/guitarist Jesse Sparhawk will not be appearing. The group's March 17 Garfield Artworks performance will feature a trio, comprised of Sastri on vocals and keyboards, drummer Daniel Schubmehl and bassist Tony Leva.