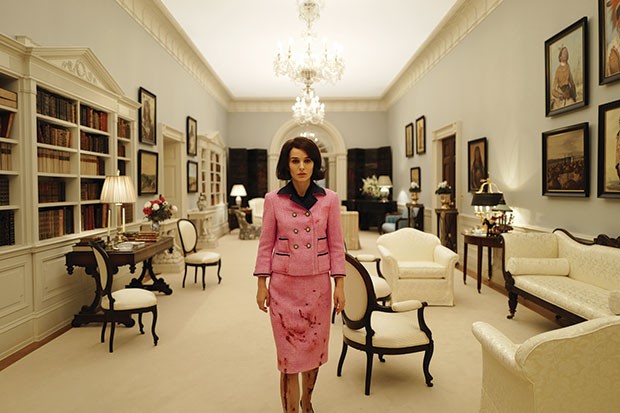 The day after: Jackie Kennedy (Natalie Portman) returns to the White House

In Jackie, Chilean filmmaker Pablo Larrain (The Club, No) revisits a shattering historical event — the 1963 assassination of President John F. Kennedy — through the intertwined public and private experiences of one woman, his widow, Jackie Kennedy. The film moves through the immediate hours after the assassination and the days leading up to the funeral.

The film is framed by having Kennedy (Natalie Portman) sit for a magazine interview in Hyannis Port shortly after those events. Notably, she demands editorial control; this will be her story. Occasionally, the film flashes back to earlier, happier times, such as her historic 1961 televised tour of the White House restoration, or some of the glittery parties held at 1600. Besides the unnamed reporter (Billy Crudup), Kennedy works through her feelings by talking with her brother-in-law, Bobby Kennedy (Peter Sarsgaard), a priest (John Hurt) and her aide (Greta Gerwig).

On one level, this is an intimate film about grief, and Larrain keeps the focus close on Portman’s expressive face and on the universal: what to tell the children, the half-empty marriage bed. But as much as Jackie is about emotional process, it is also about Kennedy’s liberation. It is a change forced by horrific circumstances, but by the end of 1963, she is no longer simply “Mrs. John F. Kennedy” (as introduced in the 1961 TV show) or the First Lady. “Call me Jackie,” she says.

In one instant, Kennedy loses her husband, her home and her role, and Jackie recounts how she moves to define both her husband’s legacy and herself. A student of history, she is keenly aware of political theater; it is a time of strange empowerment where Kennedy can control the message through the ladylike demeanor she was known for: her poised public presentation. She has just hours, days; there is no time to wait for history books: “We have television now,” she tells the reporter. “People can see with their own eyes.” So when Ladybird Johnson suggests that Kennedy change out of her bloodied pink suit before deplaning in Washington, she disagrees: “Let them see what they have done.”

Later she decides that all the formal funeral pageantry she fought for — “a big beautiful procession that the world will remember” — was “for me.” It enables her to grieve publicly as required, but it is also the opportunity to begin to shape the Kennedy White House story. It is she who supplies the romantic sobriquet “Camelot,” as well as that fairy tale’s indelible closing images of a beautiful young family standing resolute for a nation’s pain. History isn’t simply what happened; it’s what’s remembered and it’s open to being crafted.