“Community is at the heart of what we do.” 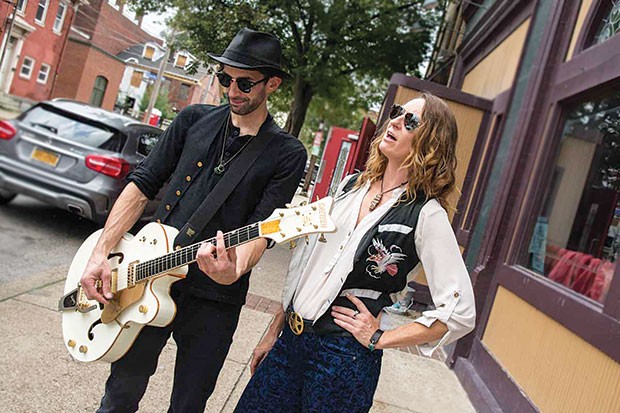 Halloween season is the perfect time to put on a tribute or cover show, because everyone’s in the mood to dress up and become someone new, even for a night. During Halloween weekend, several bands will be performing tunes spanning the career of Jack White, one of the spookiest dudes in rock ’n’ roll.

Jack White is most often recognized for his solo work, and his collaboration with Meg White in The White Stripes, but he’s also been a part of the bouncy indie-meets-classic-rock Raconteurs and the very classic-rock group The Dead Weather.

At the tribute show held at the James Street Gastropub, on Oct. 28, Memphis Hill will be performing tunes from The Dead Weather; Spish will be performing as The White Stripes; Working Breed will be tackling the Raconteurs; and Dhruva Krishna and a host of other musicians will be showing off White’s solo work.

Krishna, assistant venue manager at James Street, and Vic Cherubim, guitarist of Memphis Hill, have had the idea for this tribute show cooking since April. Between busy work and tour schedules, Cherubim and Krishna decided October would be the perfect time to honor Jack White.

“[Jack White’s] kind of a spooky dude,” Krishna says with a laugh. “I’m a big fan of his work and his range.”

“I, along with the rest of Memphis Hill, am a huge Jack White fan, in all of his iterations. We picked up a few Dead Weather covers over the last couple years that became staples of our live shows, beginning when Lucy Clabby joined the band,” explains Cherubim via email. “The songs are the perfect blend of sweet and heavy — they are just so much fun to play! I’m really looking forward to playing ‘Hang You From the Heavens’ and ‘60 Feet Tall,’ two of my all-time favorites.”

Although Cherubim isn’t from Pittsburgh and now lives in Boston, he says Pittsburgh is where his heart is. Memphis Hill is split between Boston and St. Louis, so the band is coming a long way to play the set. 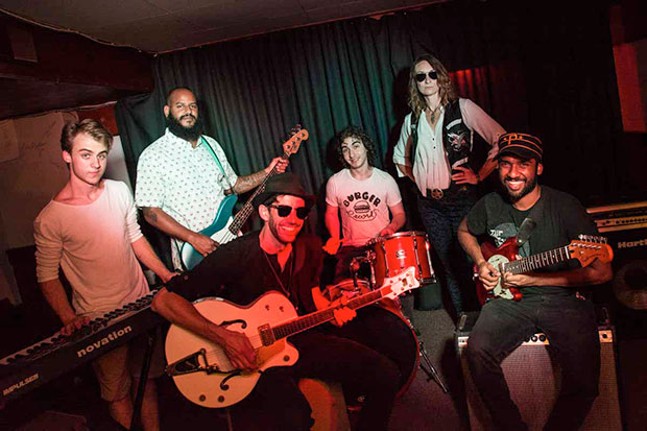 CP photo by Sarah Wilson
Performing at the Jack White Tribute Show: Mitch McDermott, from The Summercamp; Chris Trepaniger, from Killer of Sheep, Devin Moses and The Saved; Mike Dugan, from Working Breed; Sam Berman, from The Nox Boys; Erika Laing, from Working Breed; and Dhruva Krishna, from MANIC SOUL and Run The Meat

“We are thrilled to come back to town to be with the community that we have grown to love so much over the past several years,” writes Cherubim. “The show features bands and musicians that are essentially a part of the same big happy family that’s gone from sweating it out in basement shows at The New North, to sharing stages at the Wilkins Block Party.

“We’ve been together for a while, and I can’t wait to be reunited with the team!”

If the family-reunion vibe and earnest excitement of bands playing music from one of their favorite musicians wasn’t sweet enough, the entire event is a fundraiser for the Sweetwater Arts Fund.

“Every single dollar from the door goes to Sweetwater,” says Krishna.

When the duo was plotting this tribute show, they knew they wanted it to be a benefit performance. Cherubim had done some digging to find a local cause that connected people with the arts.

But Sweetwater addresses that challenge, combining music and education with a community focus.

“Their mission of building community through music and art resounded very strongly with me, and it fits quite well with all that Memphis Hill and The South crew stands for,” writes Cherubim.

The money from this event will be donated to the Sweetwater Community Arts Education Fund, a scholarship program that allows community members who can’t afford classes at Sweetwater Center For the Arts to access its services; Sweetwater plans to give out 100 scholarships by the end of the year. Classes are offered across the creative spectrum, from culinary arts to visual and audio arts. Sweetwater is also a cultural institution in the Sewickley community, where it has been operating since the late 1980s.

A benefit show like this, rooted in a tight-knit community of musicians, is exemplary of the environment James Street Gastropub has built over the years. Somewhat unexpectedly, this will be one of the final shows at the bar. James Street is shutting its doors voluntarily after a host of complaints about noise to the state Bureau of Liquor Control Enforcement. The show takes place just 15 days before the venue shuts closes.

The event is a way for one community hub to use its remaining time to help another; it’s just one of the many ways James Street has given back to the Pittsburgh community.

“At James Street, we do things differently than most people,” says Krishna. “It’s a really good community, and that bleeds into the events we do. We take chances on events and take sentimental input, so we are happy to book benefit shows and not charge a room fee.

“Community is at the heart of what we do.”

Critics' Pick: Shake Your Unlucky Off at James Street