One thing Isaiah Ross, the frontman of Jack Swing, has always wanted is for the band to not be boxed into a specific niche. Instead of being dubbed blues-rock or funk-rock, he likes the simplicity of "rock 'n' roll."

“To me, rock 'n' roll is an energy that encompasses so many artists that sound so incredibly different,” he says. “The ability to keep that energy while exploring different approaches to songwriting and different feeling, in general, is a huge part of what makes my favorite artists so great.”

Today, Jack Swing, made up of Ross (vocals), Jonathan Lightfoot (drums), and Rowdy Kanarek (guitar/bass), showcases their eclectic rock style with new single, “Whether I Do,” the first song to off their forthcoming yet-to-be-named EP.

Recorded at The Church Recording Studio with the assistance of engineer Dave Hidek, “Whether I Do,” is a buoyant and lush tune with a clean harmony and infectious melody driven by an undercurrent of surf-rock. It’s a departure from tracks found on Jack Swing’s 2019 release Supermoon, an EP flush with slinking beats and powerful instrumentals.
click to enlarge


“This song began as me trying to emulate [Stevie Wonder], so it's always interesting to see the finished product of something like that,” says Ross. “This EP is definitely a bit different from Supermoon, but so were the circumstances of inspiration surrounding the songs. You can expect a bit more focus on groove. I also think each song has a unique and specific place on the record which adds a unique power.”

The band has been working on “Wheather I Do” for years — they used it as an NPR Tiny Desk Submission in 2018 — but it was only recently that it got to where they wanted it, a “very clean and to the point arrangement.”

“One that I think that causes for a lot of this song to easily get stuck in your head,” says Ross. “Which when paired with genuinely powerful emotion, makes for the kind of single that I like to hear from a band.”

There is no set release date for the EP yet, but it will most likely come out this summer. A single release show at Spirit was scheduled to go along with the release of “Whether I Do,” and was canceled along with the rest of Jack Swing’s upcoming shows.

“Fortunately, Jack Swing is in a unique situation and we live together," says Ross. "So this has given us a lot of time to work on new things, mainly our full-length LP that we are in the final stages of writing. ... We are currently planning on releasing everything according to schedule. Knowing so little about this virus, we figure the best we can do is to keep creating pieces of art that people may find as some sort of inspiration during this time. It also doesn't hurt to keep ourselves busy with projects so we don't go stir-crazy during the quarantine.”

For fans looking to support Jack Swing during the pandemic, their music can be purchased and streamed on Bandcamp, as well as streamed on most major streaming platforms.

"If you are so inclined, you can also Venmo us directly at @jackswingpgh," says Ross. "Even if you are financially unable, a simple stream goes a long way! We want everyone to prioritize self-care during this time. Treat yourself to what you need to decompress. Check out ours and others' tunes and see if that helps at all. If you do find it in your heart to donate something, it would mean the world. As we are planning on going full speed ahead with all releases, truly anything helps. Believe in yourselves and your community and we will get through this! Stay strong.

"I hope people can use 'Whether I Do' as a piece of light within a very dark time. This track is one to inspire you to reach for the version of yourself that you believe you can be, and hopefully, it makes you wanna dance a little bit while you are on your way."

Listen to "Whether I Do," below. On Thu. April 2 - the day Jack Swing was scheduled to premiere the song at Spirit - the band will be livestream a performance of the song on Facebook and Instagram. 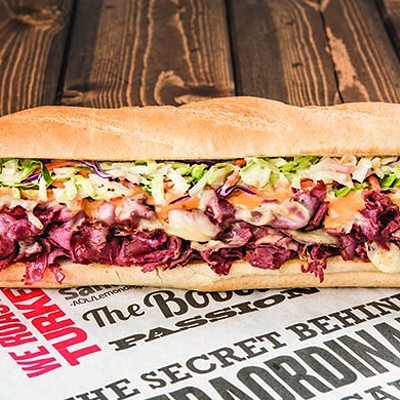