The venue did well by smoke and some meats, but fell short in other places 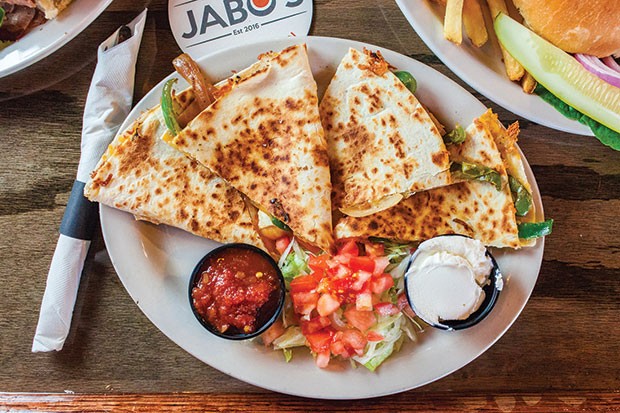 Pittsburgh is finally learning that barbecue is about smoke, meat and sauce — in that order. For decades, local chains and mom-and-pop places alike roasted slabs of poorly butchered ribs, finished them over charcoal, and slathered them with sticky-sweet sauce that, if you were lucky, included some pepper and cayenne.

Now, we’re frequently pleased to be served well-smoked meats with sauce on the side. We were willing to overlook the egregious spelling of Jabo’s Smoque House in hopes that its smoke would warm a wintry night.

Jabo’s — from a nickname of one of the owners — has set up shop in the handsomely renovated storefront that long housed Del’s, in Bloomfield. Inside are two rooms, one with the bar and another with several tables. A big flat-screen broadcast the hockey game, and cheesy classic dad-rock played too loud; our server struggled to hear our orders. The interior wasn’t much, but at least it wasn’t covered with pig silhouettes, Pittsburgh sports kitsch or overblown photographs of the Golden Triangle at night.

It was a fine backdrop for getting our feed on, which we proceeded to do with pulled-pork nachos and tortilla soup. The former was pretty unremarkable but for one essential element: the pork. Generous shreds — and sometimes chunks — of tender, succulent pork, flavored with smoke, covered the mound of chips garnished with scallions, canned olives, diced tomatoes and pickled jalapeños. The problem was that it seemed that the cheese was melted on (and under) the chips and then everything else added on top, so it required manual assembly to get a well-balanced bite. Furthermore, while we were thankful that the whole mass wasn’t drenched in barbecue sauce, some form of seasoning or condiment might have helped.

The soup was thick and russet-colored, almost like tomato soup, with insufficient slivers of crispy chips, but plenty of chunks of both light and dark chicken meat. A wedge of lime to squeeze on and stir into this soup would have rounded out its mild flavor profile.

Aside from cornbread, the list of sides was what you’d find at any Pittsburgh tavern: six forms of potato (baked, fried, mashed, home-fried, salad and sweet), a couple vegetables, and so on. Alas, the cornbread, a remarkable tall square with a craggy top, was the familiar, cakey, too-sweet local style. Baked beans were in a thick sauce, their sweetness balanced by generous shreds of pork and a hint of heat, owing as much to Boston as to Texas. Coleslaw was finely shredded and crisp, but also bland; you might eat it more for texture than flavor. The same can’t be said for the garlic mashed potatoes, which were lumpy, with bitter garlic flavor.

The main menu is actually dominated not by slabs of meat, but sandwiches. Our burger wasn’t super-juicy, but it was super-flavorful from grilling over what must be a wood fire. Pulled pork overwhelmed the bottom half of its kaiser roll with juiciness, which is not exactly a complaint.

The Bloomfield brisket sandwich cleverly inserted smoked brisket into an Italian composition with peppers, onions and provolone. It was a great concept that didn’t quite come together, probably for want of a condiment.

We found insufficiently bold flavor in the combo platter as well. It included brisket, three short-rib bones and a chicken leg. The chicken was excellent — the rich dark meat suffused with smoke, the skin still faintly crisp. But despite ample, well-proportioned smoke, the brisket and ribs both featured timid rubs. The ribs were gloriously ruddy, but underseasoned, while the tender brisket lacked a good fat cap. Without a flavorful rub to compensate, we missed the melding of fat and meat.

Of course, none of this was served completely dry. Jabo’s offers three sauces — bold, tangy and house — served on the side for application at the diner’s discretion, a policy we support. Our server suggested bold for brisket, tangy for chicken, and house for the ribs. The first two were mahogany-brown and thick, the third redder and a bit thinner and sweeter. The bold was a bit much for the brisket, although it would probably work on a sandwich; the tangy sauce suited the chicken, although the meat was so good we tried it only sparingly; and the house complemented the ribs well enough, but raised one more flaw: The bones simply weren’t very meaty.

Jabo’s nailed the smoke and did a great job with pork shoulder and chicken. But it fell short on the ribs and brisket, while serving up sauces that were OK but unexceptional. Ultimately, our search for a great barbecue place continues.