It's time to tear down Mount Washington's illuminated sign

The neon billboard is historically unpopular and aesthetically displeasing 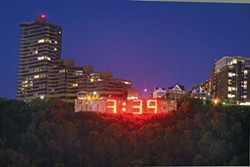 Mount Washington's flashing neon billboard, with its 30-foot-high letters stretching across more than 200 feet, is either an icon or an embarrassment, depending on your view. Recently it has become the subject of controversy between Mayor Bill Peduto, who wants the sign cleaned, but not otherwise changed, and owner Lamar Advertising, who wants to replace it with a gigantic video billboard, like in Times Square or the Dallas Cowboys' stadium.

While some today consider it a sentimental favorite, this sign has been historically unpopular. When it was first installed, in 1921, Mount Washington residents actually sued to stop Alpha Sign Company, the earlier incarnation of longtime owner Pittsburgh Outdoor Advertising, but they lost. Indeed, Pittsburgh's first zoning code of 1923 was implemented to address a number of urban ills, including garish and misplaced billboards. Subsequent projects were prevented, but the Mount Washington sign was grandfathered in.

By 1954, the sign had fallen into disrepair. Meanwhile, the climate of clean-sweep renewal that accompanied that era's Pittsburgh Renaissance supported a renewed and widespread sentiment that the sign be taken down. Again, several Mount Washington civic groups advocated for its removal. Long-time advertiser Pittsburgh Brewing declared that it would end its lease of the sign as a civic gesture. The Pennsylvania Railroad, which owned some of the land on which the sign sat, donated its parcel to the city. Mayor David Lawrence even met personally with Pittsburgh Outdoor Advertising head Henry Posner, requesting removal, which the Zoning Board of Adjustment eventually ordered.

Remarkably, defying both Lawrence and public opinion, Pittsburgh Outdoor Advertising sued to have the sign maintained on the part of the land that it still owned, under the premise that it preceded the city's zoning code. According to a 1954 Pittsburgh Press article, Pittsburgh Outdoor Advertising "ridiculed hilltop residents for tolerating dilapidated houses and other unsightly business structures, claiming this ‘distracts' more than the beer sign." Cott Beverages, a new (and seemingly uninformed) vendor in the Pittsburgh market at the time, leased the sign, which flashed "17 Beverages" and "It's Cott to be Good," while also eliciting further outcry. "We're sorry we got into this row," a company official commented.

Alcoa leased the sign in 1967 and perpetuated the compromise that continues to this day. The sign would continue to flash bright-orange neon, but it would have only the time and public-service messages. But the sign continued its regular descents into disrepair. In 1979, Alcoa decided that the sign was "an eye-sore during the day," reported the Pittsburgh Post-Gazette in 1980. The company hired Al Sauls Design to develop the tessellated gray-and-white background that spells Pittsburgh. This once-subtle treatment is now barely visible.

Now comes Lamar's proposal to replace the sign. "Their initial request was to make it the country's largest LED billboard," says Mayor Peduto, "which we were never supporting." A Lamar spokesperson did not respond to requests for comment. According to former Pittsburgh City Councilor Doug Shields, zoning law (which he helped rewrite in 2011) forbids any change from the sign's current use, precisely because that use precedes the original code of 1923. The Ravenstahl administration, Shields explains, simply did not enforce the zoning code.

Peduto has a contrasting view. "Lamar needs to clean it or sell it ... [to] abide by the rules that created it." He insists that, if it remains, the use as a community sign must continue. "We're willing to work with them to get a new corporate [sponsor, but] we're not going to turn it into a large advertising billboard."

While only a few have suggested actually removing the billboard, in an era when appreciation of Pittsburgh's green hillsides is greater than ever, that's just what Lamar should do. The move would have significant precedent. In 1933, the Coca-Cola Company installed a huge sign along what is now P.J. McArdle roadway, including an 80-foot clockface that was touted as the world's largest. By 1959, amid continuing anti-billboard sentiment, the Pennsylvania Railroad, which owned part of the land on which the sign sat, gave its parcel to the city. Pittsburgh Outdoor Advertising, which operated and leased the sign, was forced to remove it. The company sold the clockface and mechanicals to Duquesne Brewing, which put the iconic timepiece on its South Side building, where it remains today, albeit under changed ownership and sponsorship. But the original billboard is long gone, a logical outcome of the sentiment that the hillside looks better with trees than it does with illuminated advertising.

Pittsburgh has lost signs that it should have saved, such as Westinghouse's iconic flashing logos where PNC Park is now. With the Mount Washington billboard, though, we have been keeping a sign we should lose.