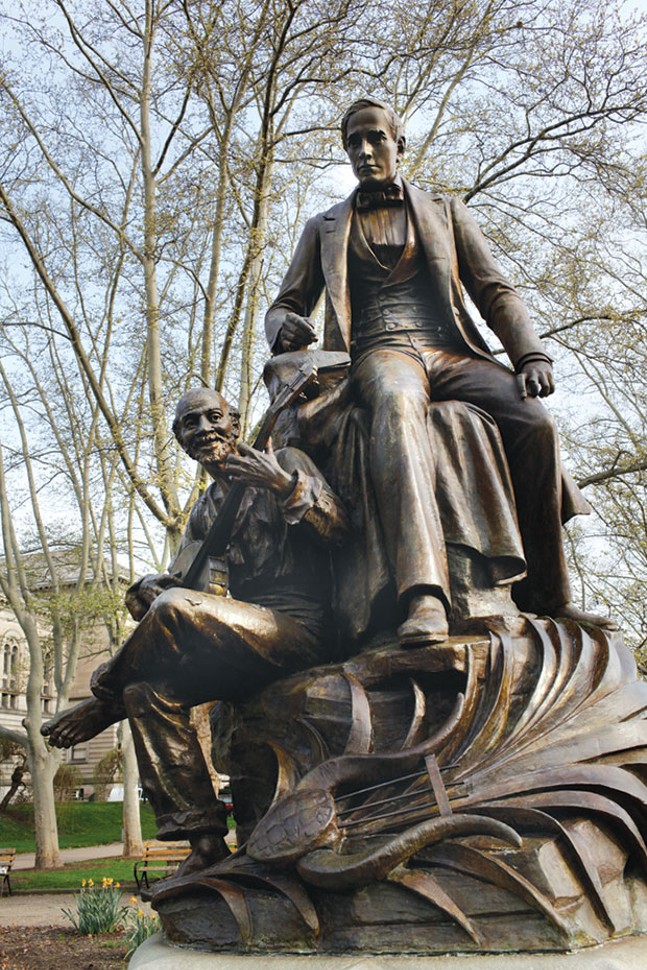 Even for a sculpture that has been the subject of scorn and accusations of racism for decades, Giuseppe Moretti’s statue of Stephen Foster, on Forbes Avenue in Schenley Plaza next to Dippy the Dinosaur, has had a busy and controversial couple of weeks.

The Pittsburgh-native 19th-century composer is consistently praised in the United States and abroad, often viewed as the inventor of American popular music. His songs such as “Oh Susanna,” “Camptown Races” and “Jeannie With the Light Brown Hair” remain widely recognized classics.

However, many of his songs sentimentalize or spoof the lives of enslaved African Americans in imagined dialect that is roundly offensive today. Historians argue that Foster was sympathetic to enslaved African Americans, and even African-American abolitionist Frederick Douglass praised his songs. “They awaken sympathies for the slave, in which anti-slavery principles take root, grow, and flourish,” Douglass wrote. But today’s context of equal rights sets profoundly different standards than did the Abolition era.

Changing sensibilities also apply to the larger-than-life bronze, which was created in 1900 by Moretti, with creative guidance from a committee that included newspaper publisher Thomas Keenan and political boss Christopher Lyman Magee, as well as Foster’s brother.

The statue depicts not just Foster, but also Uncle Ned, the fictional, enslaved African-American subject of a song by the same name. In the sculpture, banjo-strumming Uncle Ned embodies a number of negative racial stereotypes — ragged clothing, bare feet and a frivolous grin, as well as his position at the feet of the serious and well-dressed Foster. There could hardly be a more vivid representation of a white man keeping a black man down.

Unlike Foster’s music, there are no period comments from African Americans praising the sculpture. Kirk Savage, a professor of art history at the University of Pittsburgh who specializes in representations of race in art, says the monument, influenced by Foster’s brother, “is really a product of Jim Crow … making a statement about [the perceived] proper relation of the races.”

Pittsburgh activist Florence Bridges advocated for the removal of the statue during the civil-rights movement in the 1960s. In 1997, Mayor Tom Murphy responded to complaints about it by forming a committee. “But nothing happened,” said local pop-culture historian and cartoonist Joe Wos.

In 2010, when local playwright Martin Giles directed a play celebrating Foster’s music at the Stephen Foster Memorial, located just across Forbes, he criticized the statue in comments to CP: “I don’t know why it is still there.”

Even last year, as Pitt celebrated its Year of Diversity, the university fielded numerous complaints from students about the monument. Pitt Vice Chancellor for Diversity Pam Connelly formed an advisory committee including students, faculty and other interested community members.

But now comes August 2017, and violence erupted in Charlottesville, Va., over the call to remove a public statue of Robert E. Lee. In fact, Charlottesville had conducted a series of deliberative discussions with numerous of its own community groups to consider the fate of its Lee statue and other monuments to the Confederacy before outside groups chose those artworks as a focus for a local protest turned fatal riot and national headline.

The City of Baltimore responded by removing its Confederate statues literally overnight.

Locally based, nationally known blogger Damon Young, of Very Smart Brothas, published a post titled, “The Most Racist Statue in America Is In … Pittsburgh, and It’s the Most Ridiculous Magical Negro You Will Ever See,” as an intensifying flurry of inquiries emerged on social media, and in new outlets. “It’s becoming a much more public conversation,” says Savage.

Pittsburgh’s mechanism for reviewing the work, which is city-owned and located on city property, is actually in place. “The way our system works, the Art Commission is the body to review it,” explains City Planning Director Ray Gastil. “The issues that have been raised are very serious ones.”

Art historian and events producer Kilolo Luckett, who sits on the Art Commission, has advocated for removal of the monument since her days as a student in the 1990s: “No words of context could ever resolve the racist imagery that that statue reinforces.”

A recent statement from the National Trust for Historic Preservation argues for precisely the kind of case-by-case deliberation that the Art Commission is scheduled to undertake in the fall, though Gastil, who oversees the Art Commission, says a date has not been set.

Such a process will address the problems of the Foster monument, which include imagining African-American voices as subservient, instead of engaging them as equals. 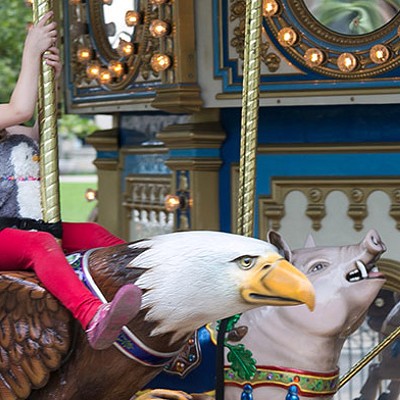