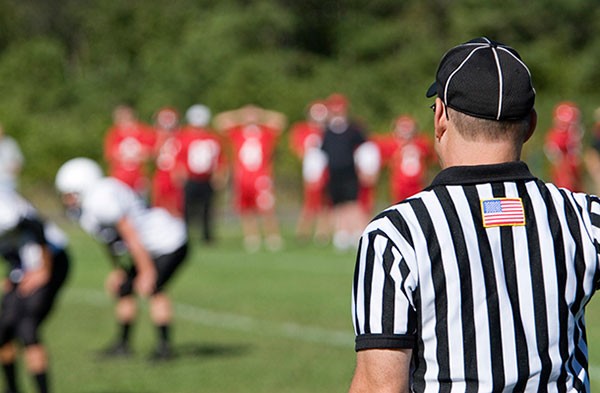 Please don't insult the referee's mother.
For some, Friday will just be Sept. 2. For other, it will be the official unofficial start of fall when the WPIAL football season gets underway. It’s a special time of year around these parts. Throngs of fans — whether they have any kids playing or not — will crowd into stadiums across the region to watch teenagers play one of this country’s most popular games.

And as the season nears, I want to stress that a sense of decorum should be exercised at all times. Here a few things to keep in mind:

1. These are kids. Please don’t yell at them like they were Kordell Stewart or Bubby Brister. It’s fine to go to the game and have a good time, but if you’re over the age of 20 — and especially if you’re over the age of 35 — and you’re telling some sophomore from South Fayette that he sucks ass, I submit that you are the one who sucks ass and maybe you should just stay home, Netflix Varsity Blues and yell at James Van Der Beek.

2. The official will not change his call just because you insult his mother. Like you, a high-school-football referee loves his mother. So remember how mad you get when someone insults her. Remember that while these guys do have some training and do get paid a nominal fee, they’re not Ed Hochuli and Gene Steratore. They will make mistakes; we all make mistakes. You charging the field when he flags your son for the chop block you taught him is a mistake.

3. Nobody wants to hear about how much the game has changed since you played. Chances are you were not as good at this game as you thought you were. In your head, you see yourself as James Harrison making a 90-yard interception return for a touchdown during the Super Bowl. In reality, you looked more like Harrison Ford trying to move his old knees around the galaxy in the last Star Wars film.

4. Relax. If you enjoy going to the games, then you should definitely go, as long as you remember that it’s only a game.

When it comes to WPIAL sports, it’s all in the name