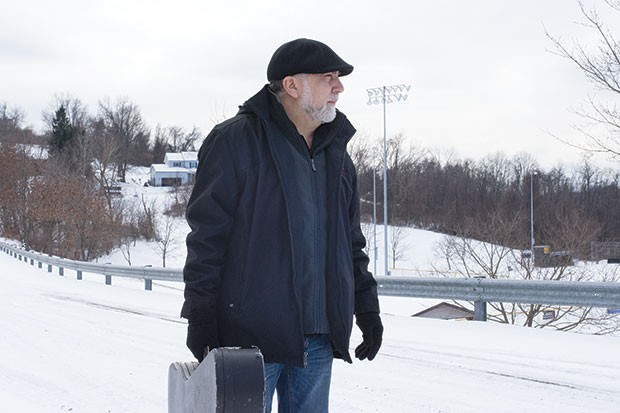 Matt Barranti remembers the first time he heard Foghat’s Fool for the City. He was in 11th grade, hanging out with his friend Danny, two doors down from the Barranti home in Venetia, Peters Township. The album, which included the band’s bluesy stomp, “Slow Ride,” might not have been as important to Barranti as the Allman Brothers Band, which inspired him to pick up the guitar. But the memory came rushing back to him earlier this year, and with good reason: Barranti toured as a member of Foghat, opening every night’s set with that album’s title track. “It’s so weird walking out and playing that thing and remembering what it was like when I first heard it,” he says. “Forty years later, roughly, I’m onstage with that band. Shows why you never quit, doesn’t it?”

But the slot with the British blues-rock legends is only one part of Barranti’s musical world. His own group, the Matt Barranti Band, is poised to compete with blues acts from around the world. After winning the Western Pennsylvania Blues Challenge earlier this year, the group will travel to Memphis in January to compete against 260 acts in the 34th Annual International Blues Challenge. Bands from as far away as Israel and Norway will be competing for top honors in the five-day event.

While some competitors might be able to rattle off the list of Challenge prizes, Barranti has other things on his mind. “I just want to do good,” he says. “Whatever comes out of it, I want to do the best I can. We’ve been rehearsing and rehearsing, going at it and refining things, trying to polish it.”

Growing up, Barranti had a strong affinity for Southern rock. It shows in the Barranti Band’s style, which features a strong boogie backbeat driving its electric blues. If the guitar solos touch on the influence of Duane Allman, it’s no surprise. “I heard Duane Allman play, and I said, ‘I want to know what that is. I want to know how to do that,’” he says. “I wanted to be able to convey that emotion with a guitar.”

Though he took lessons, much of his schooling came by listening to records, repeatedly. “It was the ’70s,” he says. “The way we learned was pick the needle up [off the record], put it back down. Over and over, trying to hear what the notes were. And you tried to find them” on the guitar.

The blues comes in all styles and shapes these days. What sounds like three simple chords in one musician’s hands can become an emotional testimony in someone else’s. Repeatedly spinning records helped Barranti understand the keys to the blues. “I think notes are very important,” he says, after reflecting for a moment. “Music needs to be melodic. It’s not just getting up there and showing how fast you can play, or that you’re able to play something that Jimmy Page played. You need to be able to make an emotional statement with your notes. I’m not a theoretical player, but I work on technique to the point where, if I’m having an inspired night, my fingers are able to do whatever’s coming out, if that makes sense.”

Over the years, Barranti has opened for numerous national acts, from the Allmans to blues artists like James Cotton and Jeff Healey. For a while, he hoped that someone would hear his playing and take him under their wing. Three years ago, after opening for Foghat at Jergel’s, he was called backstage by the band at the end of the night. “They explained that everybody in the band has a backup,” he says. “They liked the way I played slide guitar, so they asked me if I would be the backup player for Bryan Bassett. I said sure.”

They sent him material to learn the songs, and even flew him to Florida to sit-in with the band. Barranti wasn’t sure if anything would come of it, but last December, he woke up to an email saying Bassett was having heart issues and the band needed him. “They flew me to Florida, and we rehearsed for three days and hit the road. It was a blast,” he says.

Throughout January, February and early April, he toured throughout the U.S. with Foghat. The group allowed him to show his personality during the solos, but some things were also written in stone. “‘Slow Ride’ needs to sound like ‘Slow Ride.’ You honor the original intent of the songs,” he explains.

Barranti wasn’t about to take it easy after getting off the road. His band went through some lineup shifts before settling on the current personnel: drummer/vocalist Greg McIltrot, keyboardist Fred Delu and bassist Willy Franklin. In addition to singing, McIltrot also blows blues harp, while holding down the tempo. Delu and Barranti have known each other since the ’70s, but they just joined forces with Franklin and McIltrot this year. The guitarist calls them “the greatest musicians I’ve ever worked with.”

Regarding the International Blues Challenge, Barranti says he’s nervous, but adds that he’ll be happy if his band makes it past the first round, since that’s when most of the competitors get sent home. “If you make it to the finals, you have 20 minutes. I know guys that can’t even tune a guitar in 20 minutes,” he laughs. “And you’ve got 20 minutes to show everything you’ve got.”

The band hosts a send-off party for the trip to Memphis on Fri., Jan. 12, at Moondog’s, in Blawnox.

#MusicMonday Wrap-up: May 6, with concert announcements

Crack the Sky: Variety for the albums, familiar songs for the shows