It's Back: State voter ID is alive and well for May primaries, at least for now | News | Pittsburgh | Pittsburgh City Paper

It's Back: State voter ID is alive and well for May primaries, at least for now

"We will file a motion to block it." 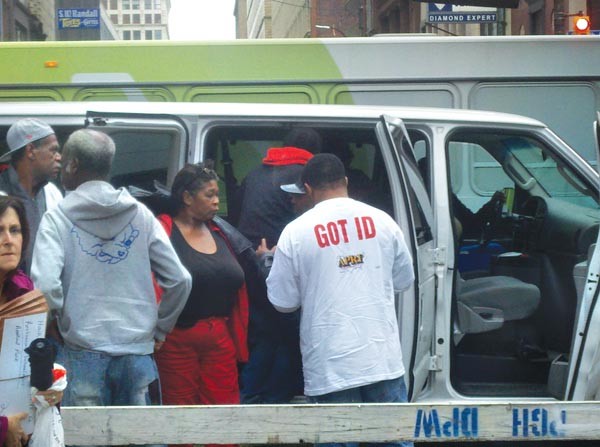 Opponents of Pennsylvania's voter-identification law won a battle when a state judge temporarily suspended it on Oct. 2. But with the block extending only to last year's general election, the war is far from over.

As of now, the law — which requires voters to present photo identification at the polls — is active and on the books. And while a full trial to decide the law's constitutionality will probably be held sometime this summer, that leaves the requirement in effect for the May 21 municipal primaries. But the plaintiffs in a lawsuit challenging the measure say they intend to try to block it again this spring, and to eventually wipe it from the books completely.

"We will file a motion to block" the law from taking effect this spring, says Vic Walczak, the legal director for the state American Civil Liberties Union. "We don't believe this law should be allowed to interfere with any election, because people will be disenfranchised."

Even by conservative estimates, Walczak says, 100,000 Pennsylvanians could face barriers in obtaining proper identification to vote.

After Gov. Tom Corbett signed the law in March, the ACLU, the Advancement Project, the Public Interest Law Center of Philadelphia and the Washington, D.C., law firm of Arnold and Porter sued the state, arguing the law could disenfranchise hundreds of thousands of voters who couldn't get proper ID. On Oct. 2, Commonwealth Court Judge Robert E. Simpson Jr. granted a temporary injunction, suspending the requirement for the 2012 presidential election.

As of press time, attorneys opposing the requirements hadn't filed for an injunction to halt the law. Walczak says they are waiting to hear a timetable from Simpson on how the case should proceed.

The state says it intends to fight to uphold the law. "We think everyone should get an ID, and we think everything in the law will be in effect and is on solid legal ground," says Ron Ruman, press secretary for the Pennsylvania Department of State. Ruman notes that PennDOT has been offering free voting-only IDs since September. "[R]eally, anyone should be able to get an ID without waiting," he says.

The newer IDs ease some of the law's original requirements, but barriers remain, Walczak says. For one thing, "You're still required to get to the [PennDOT facility]" — a challenge for some voters in rural areas, or who have difficulty traveling.

Last year, 175 organizations formed the non-partisan PA Voter ID Coalition to educate the public on what they needed at the polls. However, because of the ongoing legal fight, activists were never sure what to tell voters about ID requirements. Now as another election season heats up, they are facing similar challenges.

"One of the confusing points last year was that this uncertainty was still hanging out there five weeks before the election," says Ellen Kaplan, vice president and policy director at the Committee of Seventy, a Philadelphia-based good-government group that created and led the Coalition. "That's certainly contributing to a lot of confusion now."

What's more, Kaplan notes, last year's education efforts capitalized on the draw of a presidential campaign to energize voters and outreach groups alike. Municipal primaries typically lack that kind of star power, which could be a barrier to outreach efforts.

"It's easier to get people to contribute when it's a presidential election," she says. "Resources to do [an outreach] campaign will be a lot smaller this time."

In Pittsburgh, voters will decide, among other things, the fields for mayor and city council. In Philadelphia, "the top of the ticket is city controller and district attorney," Kaplan says. "I'd like to say that people get excited about that but frankly, they don't."

Local activist Celeste Taylor, who oversaw the Voter ID Coalition's efforts in Pittsburgh, says the groups are meeting this month to shape their efforts for the primary.

"The work around the voter-ID issue gave us energy to work with people who have been woken up," says Taylor. "People were seeing this as an affront to democracy."