It's a Wonderful Life at Bricolage

MIDNIGHT RADIO: IT'S A WONDERFUL LIFE

Dateline Hollywood, 1946: RKO Pictures releases the Frank Capra comedy/drama It's a Wonderful Life. Though initially a box-office disappointment, this story about a man learning the impact he's had on others will become, according to the American Film Institute, the "Most Inspiring Movie" of all time.

Dateline Connecticut, 1997: Playwright Joe Landry adapts the film into a 1940s-style radio play that is, according to American Theater magazine, one of the 10 most produced plays in America.

2014: It all comes together with Bricolage's production of Landry's adaptation, which (and this came as a surprise) made me very happy to see George Bailey redeemed one more time.

The temptation to have camped up this well-worn classic must have been unbearable, but director Alex Tobey and his cast never once condescend to mug or wink at the audience. This simple, honest story, with all its sentimentality, is given a simple, honest airing — with music director Jason Coll and musicians Kira Bokalder and Rasa Mahmoudian providing supple, defining underscoring. 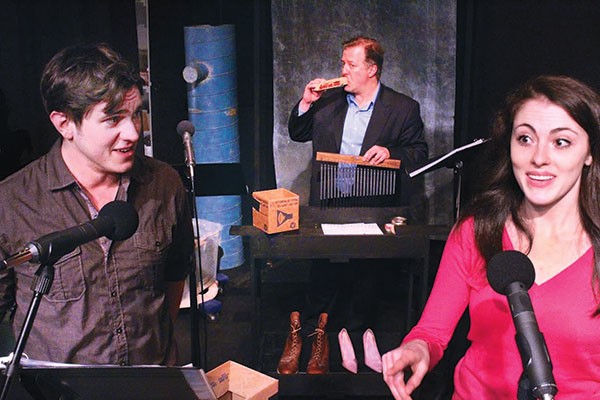 Brett Goodnack (left), Jason McCune and Andrea Weinzlierl in It's a Wonderful Life, at Bricolage

My sole complaint might be that this five-actor cast could have used a sixth; while the doubling and tripling of roles can sometimes add fun to the proceedings, on several occasions there was confusion as to who was saying what to whom.

Wali Jamal and Jason McCune employ a tremendously impressive host of vocal characterizations as Mr. Potter and Clarence respectively, as well as most of the Bedford Falls citizens. There aren't many female roles in the show, but Elena Alexandratos and Andrea Weinzlierl play them with moving understatement and sincerity.

And the big plaudits go to Brett Goodnack as George Bailey. While avoiding the easy trap of turning in a Jimmy Stewart impression he manages to, in a deft bit of tightrope walking, allow just enough Stewart to add a sort of Americana sheen to an already charming performance.

I'll never be known as someone who would describe life as wonderful, but this is a wonderful It's A Wonderful Life.