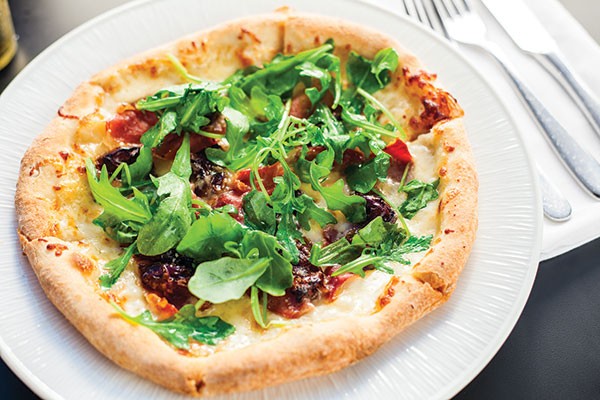 It was almost exactly five years ago that we first visited Cibo, an intimate Italian place in Regent Square that offered mildly updated dishes in a mildly upscale atmosphere. Cibo 1.0 had a good run, then shut down for awhile. Now it has reopened with a new chef at the helm, Jennifer Burfield, whose résumé includes having worked under Justin Severino at Cure and whose philosophy — flavorful food doesn’t have to be complicated — is one we can get behind.

We caught a hint of that background in our first appetizer, elk carpaccio. This was an ultra-simple platter of rounds of raw, deeply-colored meat studded with capers and baby arugula, sprinkled with fennel pollen, and drizzled with lemon oil. In its beef form, carpaccio is usually sliced paper-thin, but Burfield went a little thicker, sacrificing no tenderness while adding a pleasing element of chew. The texture was buttery, the flavor extraordinarily mild with no hint of gaminess.

Surfing the Mediterranean menu, we tried the crab beignets. The mixture of fluffy batter and shredded crab on the interior could have used a touch more seasoning, but the deep-fried crust was simply fantastic, deep brown and crunchy without heaviness or greasiness. The accompanying stone-ground mustard remoulade amply compensated for any deficit of seasoning.

Frito misto was a completely different form of fried seafood: whole prawns, calamari and white anchovies lightly coated in a tempura-like batter and fried to an ultra-light, airy crisp. Strips of fennel prepared the same way offered a pleasing contrast to the brininess of the fish and shellfish. The textures fell short of perfect, with the prawns more firm than juicy-tender, and the salt that was missing from the beignets seemed to turn up here. But again, the ethereal coating was addictive.

At first bite, Jason’s butter-lettuce salad also seemed oversalted, but once his palate adjusted, he relished the deceptively simple plate. This was also the dish that confirmed that Burfield is kind of a genius with texture. Large, whole leaves were folded over and laid out across the plate, with nothing but thin slices of radish and brown-butter croutons scattered over and among them, and the salad was drizzled with musky white truffle oil. The crispy croutons and crunchy radishes complemented the tender, juicy lettuce, and the simple dressing was in line with the rich simplicity of the flavors.

The three flatbreads on the menu — classic margherita, prosciutto with date, and finocchio (fennel) salami with oil-cured olives — have a rectangular crust that straddles a couple styles: the edges light and puffy edges like a Neapolitan, but the distinct layering between the crisp bottom and soft, chewy top more reminiscent of a classic New York pie. Our flatbread wasn’t too deeply browned, which was fine for the subtly yeasty dough. We chose the salami topping, which was meaty and only subtly fennel-ly, with enough backbone to balance the intense olives.

A half-dozen pastas were offered in large or small portions. These were sophisticated versions of classics, like eggplant parmesan and ricotta ravioli in a lemon-cream sauce with leek and chard. Delectable as these sounded, we were driven by the urge to consume tomatoes in season and ordered bucatini all’Amatriciana. A frankly hearty sauce of crushed San Marzano tomatoes, red pepper, pecorino Romano cheese and guanciale (cured pork jowl) clung to the sturdy, slender tubes of pasta for a complex dish that was salty, savory and sweet all at once.

Three entrees, plus a fish of the day, comprised the rest of the menu. We were impressed to see rabbit among them. Perhaps combining it with beans and greens was a good way to make it accessible, although it turned out that the exotic component of the dish was the greens: Swiss chard, another bold choice. It was more pliable than the traditional escarole, but with a more vegetal flavor. A light, garlicky sauce and tarragon kept the dish this side of its stew-like tendencies and the rabbit, rightly, at the fore. With some of the rich mouthfeel of pork shoulder, but a milder flavor, it would be hard to find another meat that would interplay so well with the chard and creamy cannellini beans.

The reborn Cibo has taken a dauntless step forward in ambition and execution. It still has the feeling of a neighborhood trattoria, but its newly confident ingredients, combined with an extraordinary focus on textures, make Cibo destination dining.

Kedi: The Cats of Istanbul