It probably comes as no surprise, but furries love their pets

“Ever since joining the furry fandom, I have been more aware of animal rights.”

Photo by John Colombo
Kato and Freya with Hitomi and Yoshiko

Furries love their fursonas and they love their community, but they may love their pets even more. Some furries say that getting involved in the community that celebrates anthropomorphized animal personas has helped them become more aware of the needs of shelter animals; understand the emotions of their pets; and strengthen their love of our four-legged friends. In fact, every Anthrocon, the big furry festival held each year Downtown (this year from June 30-July 3), chooses a main donation recipient. Last year’s beneficiary was the Western PA Humane Society on the North Side; this year’s recipient is the Pittsburgh Zoo and Aquarium.

Caitlin Lasky, spokesperson for the Western PA Humane Society, says that furries have become close friends with the animal shelter. In fact, the agency’s mascot, Barkley the dog, was involved in the convention last year. Dee Ryan, a five-year volunteer with the Humane Society who wears the Barkley costume, says she was made an “honorary furry” last year.

And while pets love their owners, too, each reacts differently when confronted with an owner dressed in a furry costume. Some embrace the costumes while others are a bit hesitant. But the world of furries and their pets shows that, just like the non-furries of the world, the relationship between pets and their human counterparts is a complex one.

Keener lives in Pittsburgh and her fursona is a blue Arctic fox, which she created about 10 years ago. Keener also has many other characters, including a cat-deer hybrid, a red panda and various monsters. And she has three cats: Candy, a gray shorthair tabby; Rusty, an orange tabby; and Zorro, a young all-black cat.

“My cats are not fazed by my fursuit at all,” Keener writes in an email to City Paper. “They are pretty indifferent and don’t treat me any differently in or out of suit. My boyfriend’s dog, however, has had mixed reactions. The dog gets very excited and wound up when I have the suit on. It’s really fun and adorable until he tries to eat my suit.”

She says all her cats see her a little differently, but she loves them all equally. She says Candy is the queen of the house, while Rusty adores her and follows her throughout the house. And Zorro is really all about whoever gives him some food. Keener believes that furries are united by their adoration of pets and animals.

“Many furries have joined the community because of their undying love for animals,” writes Keener. “The majority of us want to create a better world for animals and people alike. We find that using conventions to donate money to organizations for animals really helps to reach that goal.”

Freya and Kato live in New Castle and prefer to be called by their fursona names. Freya is an all-white Arctic fox and Kato is a lion. Both were featured in Fursonas, the film about furries that was directed by local filmmaker and furry Dominic Rodriguez.

The couple has two red-and-white shiba inus dogs: Yoshiko, a 4-year-old male and Hitomi, a 5-year-old female. Freya says she likes to think of them as the cartoon mice from Pinky and the Brain. (One is a doofus and the other an egomaniacal genius.) 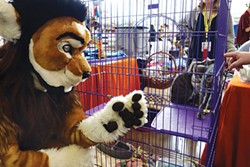 “Hitomi is bright, but for lack of a better word, kind of a bitch,” says Kato. “Yoshi is friendly, but kinda dumb. When we met, I couldn’t stand them; they require special attention. But now, they have wormed their way into my heart.”

Freya says the shiba inus, a Japanese breed that looks like a miniature husky, are extremely popular in the furry community. “Most furries we know are pretty cool about [our dogs],” says Freya. “We took them to a convention in Columbus, and they were a big hit. The hotel was pet-friendly and we were able to take around them lobby; they loved it. They were never scared of the suits; they enjoyed it.”

Freya and Kato believe their dogs have become very close members of their family. “We like to call them members of our pack; they are pack animals,” says Freya. “For us, they are just integrated into our family.”

“Being a furry and owning pet, I wouldn’t say that we love pets more,” says Kato. “But we probably anthropomorphize our pets more.”

Siergiej is a South Hills resident and has a 7-year-old domestic-longhair cat (and also some fish). Siergiej’s fursona is also a cat, but of the Siamese variety. 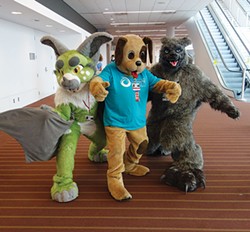 “He is really smart,” she says of her cat. “He kind of trained me. One day he licked my nose and I put him down, and now he has learned to lick my nose when he wants to be let down.”

While her cat is very smart, Siergiej says that he does not like it when she puts on her fur suit in his presence. “I tried once, and he was not having it.” She says that her cat will stretch out his front paws and push them against her face while she is wearing a cat costume.

Siergiej says this combative relationship is just as common as the ones where pets love their owners’ fursonas. She says people might not see furries out in the fur suits with pets because it can make it a bit more complicated for both pet and owner. “A lot of these people really respect animals,” says Siergiej. “So you don’t want to walk your dog with your costume on if you don’t have control of that animal.”

But regardless of whether or not pets like fur suits, Siergiej says that becoming a furry has brought her closer to animal-rights issues. “Ever since joining the furry fandom, I have been more aware of animal rights,” she says. “Yeah, people that own the costumes will do stuff at charity events at animal shelters all the time. I have a friend that has a black-cat costume, and he goes to charity events and they love him. It’s another fun excuse to put on the costume.”