Is signing Jaromir Jagr the key to a Pittsburgh Penguins threepeat? 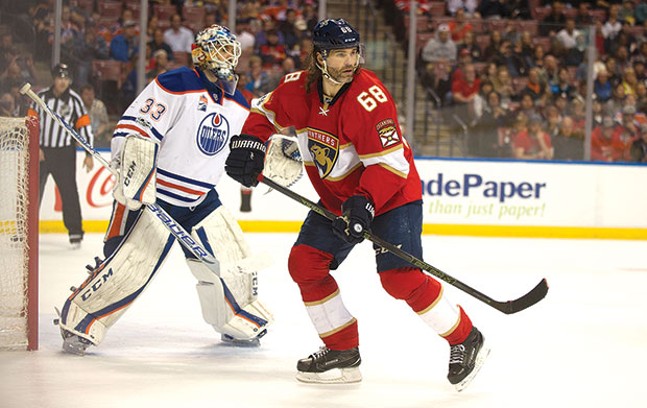 CP photo by Vincent Pugliese
Could fans once again see Jaromir Jagr in a Penguins uniform?

Coming off two Stanley Cup victories in the early 1990s, the Pittsburgh Penguins failed in their attempt for a threepeat during the 1992-93 season. But 24 years later, the Pens have another shot to win a third consecutive NHL championship, a feat that hasn’t happened since the New York Islanders won four straight beginning in 1980.

Threepeats are extremely rare in professional sports, and the Penguins’ attempt is certainly worthy of lengthy preseason discussion. But as special as winning three straight titles would be, there is a way to make it even more special.

Mario Lemieux, the team’s current owner and long-retired star, was on that 1994 team that fell short. Now, imagine for a moment what the atmosphere would be like if Lemieux came out of retirement again to help lift his team to the threepeat that eluded him all those years ago. Think about the season that fans and players would have chasing history in a historic fashion. Now, stop imagining it because it’s never going to happen. Well, not exactly.

Remember, Lemieux wasn’t the only superstar on that team. His right-hand man during that season was Jaromir Jagr, who also failed in that threepeat quest. Fast-forward 24 years, though, and Jagr isn’t just another retired old-timer. In fact, at age 45 he just finished up another productive season in the NHL.

In case you haven’t heard the news, Jagr is currently a free agent. And in case you couldn’t see where this is headed, the Penguins need to offer Jagr a contract immediately. For his part, Jagr says he will announce his team of choice on Oct. 5.

Jagr’s departure from the Penguins in 2001 has been the subject of scores of articles over the years. To be sure, a lot of factors were at play, but the one thing that most pundits and fans agree on is that Jagr and Lemieux had major friction. It was a classic “this town ain’t big enough for the both of us” scenario.

But times have changed.

Jagr is still a valuable NHL player and has the statistics to back that claim up. With the Florida Panthers last season, he had 16 goals and 30 assists in 82 games. The year before, he had 66 points in 79 games.

Had Jagr played for Pittsburgh last season and matched that output, it would have put him sixth on the team, just ahead of Patric Hornqvist. While he is 45, Jagr is also 6’3” and 230 pounds, with a famously powerful lower body. His durability is a sight to behold. To play in all 82 regular games is an amazing feat. To do it at the age of 45 is miraculous. The Penguins had only one player, Phil Kessel, with perfect attendance in 2016. That kind of toughness is perfect for a team that plans to go deep in the playoffs.

There is a major drawback to bringing in Jagr, however: The Penguins need a center, not another winger.

However, if a winger goes down — an issue the Pens have dealt with numerous times in the past decade — having Jagr available would be extremely beneficial. Especially given his effectiveness on the power play.

On the human-interest level, Jagr returning to Pittsburgh would be a great story. Most fans would love to see No. 68 take the ice for the team that drafted him so many years ago. It would be a special story, and no matter what happens in the future, it likely could not ever be duplicated. Reuniting Lemieux and Jagr for a second shot a threepeat is the stuff of Hollywood movies.

Just as Sidney Crosby is the rock star for this current group of fans, Lemieux and Jagr were the rock stars of those 1990s teams. To see Jagr and Crosby on the same roster with Mario as the owner would be amazing. I get goosebumps just thinking about it.

Not everyone is as excited about the idea. Rob Rossi, who has covered the team for years and is now the sports editor at Upgruv.com, notes that while Jagr can still play in the league, his best times are certainly behind him.

“Even though he remains arguably the finest-conditioned player in hockey history, Jagr skates like a 45-year-old hockey player [and] there really isn’t a market for 45-year-old hockey players,” Rossi says. “Certainly not in Pittsburgh, which is probably the only place it makes sense for Jagr to play given his historic association with the Penguins.

“Problem is, the Penguins only need a No. 3 center, not a 45-year-old third-line winger.”

Maybe not. But signing Jagr isn’t just about making the best hockey decision; it’s also about making the right team decision. Winning a third straight Stanley Cup will be an extremely difficult, some might say nearly impossible, task. It’s going to take a little magic to make this happen. And as far as I’m concerned, there wouldn’t be anything more magical than seeing Jagr come back to Pittsburgh to win a world title.

Josh King is the station manager at TribLive Radio.