Is a famous name and a father's legacy enough to lead Corey O'Connor to city council? 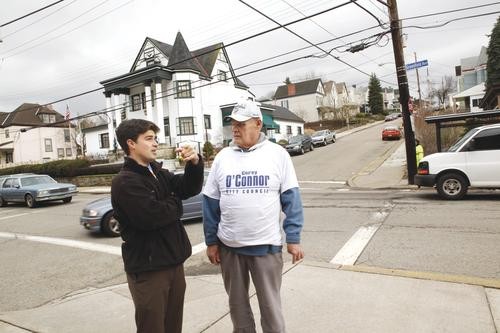 On April 13, it was hard to tell whether Corey O'Connor was running for his first term on Pittsburgh City Council ... or whether the son of Pittsburgh's former mayor had been serving the city's District 5 for years.

Standing in front of Greenfield's St. Rosalia Church, O'Connor posed for photos during the few moments he wasn't distracted by voters shouting his name. "Hey, Corey!" one man screamed through the window of his truck. "Where's my lawn sign?"

In just 15 minutes, the 26-year-old city-council candidate heard his name called from passing vehicles and pedestrians roughly a dozen times, replying each time with a wave of the hand and some friendly banter. "You've got my vote," one middle-aged man said, while shaking the candidate's hand.

As O'Connor supporter William Carey explained after chatting with the candidate, there's a reason why the young politician is such a celebrity in his East End district. "Corey's just like his dad," he says, wearing a blue-and-white O'Connor campaign T-shirt. "You just can't go wrong with this family."

Indeed, it's hard to find voters in District 5 who aren't nostalgic for the O'Connor name. And in a city historically dominated by political dynasties, that alone could be enough to win the young front-runner the election on May 17. Voters may not know where O'Connor stands on every issue, or who his political allies may be, but at least some voters will support the son based on the reputation of the father.

Corey O'Connor has lived his whole life in Squirrel Hill. The youngest of three children, he graduated from Central Catholic High School before attending Duquesne University, where he majored in education and minored in political science.

O'Connor is one of two Democrats vying for the city-council seat currently held by Doug Shields, who is running for district judge rather than seeking re-election. But just because this is O'Connor's first time running for office doesn't mean it's his first time on the campaign trail.

After all, this is a kid who grew up around politics.

O'Connor's dad, Bob, became a city councilor in 1991, when Corey was just a toddler. A well-liked politician known for his snow-white hair and fluency in Pittsburghese, the elder O'Connor became a popular figure in Pittsburgh politics, serving on council for more than a dozen years before eventually becoming mayor in 2006.

But just months into his first term as mayor, O'Connor died of brain cancer. Before he had a chance to set major policies and possibly upset some of the voters who backed him, he was gone. But the name, and all the good memories it conjures in the minds of voters, lives on for his son.

Asking around District 5, which stretches from Squirrel Hill to Lincoln Place, it's clear that the other Democrat running, Chris Zurawsky, must compete with both his rival and the O'Connor name.

"I knew his family personally," adds James Vanlandingham, 44, of Squirrel Hill. "[Corey's] a spittin' image of his dad."

But not everyone thinks family ties are worth celebrating. "In general, these local dynasties ... are a REALLY bad idea," University of Pittsburgh political-science professor Susan Hansen wrote City Paper in an email. For one thing, they are "discouraging to new people trying to enter politics."

But for good or bad, "The name recognition is very powerful," says Moe Coleman, a political analyst and professor at the University of Pittsburgh's Institute of Politics. "O'Connor's [death] is one of those sad stories people remember. Maybe if he was mayor for a longer time that name wouldn't mean so much."

Corey acknowledges the benefit of sharing his dad's last name. "Thanks to him, when I walk up and down the street, I hear, 'Oh, you're Bob's son,'" he says. "My dad always said, 'We'll always leave you with a great name to do something in the community.'"

On paper, there is little difference between the candidates' views on key issues. During a March 5 candidates' forum hosted by Shadyside's 7th Ward, for instance, O'Connor and Zurawsky both said they opposed any Marcellus Shale drilling within city limits. Both candidates also expressed support for a University of Pittsburgh Medical Center proposal to build a $600 million to $800 million vaccine center in Hazelwood that would create an estimated 1,000 jobs.

But even a minor shift on council could have real political implications. Right now, Shields is part of a 5-4 majority on council, which includes Bill Peduto, Bruce Kraus, Darlene Harris and Natalia Rudiak. The rest of council -- Patrick Dowd, Ricky Burgess, Daniel Lavelle and Theresa Kail-Smith -- isn't as cohesive, but if Shields' replacement caucuses with them, that would be the end of a progressive majority.

Zurawsky, 48, of Squirrel Hill, touts himself as the perfect successor to Shields. He says he'll fit right into the current council majority, and continue to question policies coming from the mayor's office. But, he says, there's reason to believe O'Connor will tip the balance on council and forge an alliance with Ravenstahl.

"He's the mayor's guy," says Zurawsky, a former reporter for the Pittsburgh Tribune-Review.

Zurawsky points to the fact that O'Connor served as treasurer for Ravenstahl's first mayoral campaign. Also, O'Connor's current campaign manager, Damon Andrews, used to work the same job for the mayor. "There are plenty of connections to the mayor," charges Zurawsky, noting that O'Connor is also a mayor-appointed board member of the Clean Pittsburgh Commission.

In an email posted on a Pittsburgh Post-Gazette blog, Andrews distanced himself from the mayor, explaining that Ravenstahl fired him as campaign manager because the two had differing opinions on how to proceed with the mayor's campaign after his primary challenger, Peduto, dropped out of the race. Andrews later served as an adviser to Dok Harris' mayoral campaign, when the independent candidate ran against Ravenstahl.

O'Connor, who says he's unhappy with Ravenstahl's job performance, scoffs at his opponent's accusations that he's the mayor's boy. "100 percent no," he says, noting that he plans to work cooperatively with his fellow council members and the mayor. "I'm going to be an independent thinker."

Political analysts, meanwhile, doubt O'Connor will be in the mayor's pocket.

"I don't think he's an instrument of the mayor," says Coleman.

"He has no reason to be aligned with the mayor," adds political pundit Bill Green. "He has his own name. And he's got money."

Thanks to another part of Bob O'Connor's political legacy, O'Connor has lots of money. And aside from his family name, it's one of the reasons why some believe the District 5 city council seat was practically handed to him on a silver platter.

Before his campaign for council was even launched, O'Connor's campaign committee was amply bankrolled by $130,000 transferred from his father's old political committee. The gift didn't break any campaign-finance rules -- the money was transferred in 2009, just days before new campaign-contribution rules were put into effect that would have prevented the transaction. But it did raise concerns about whether the race to replace Shields would truly be a fair fight.

"People feel uncomfortable about all the money he got from his dad," says Zurawsky.

The hefty campaign bank account, which has helped O'Connor erect giant billboards in Greenfield and Squirrel Hill and send out mailers directly to voters' homes, certainly gives the impression that O'Connor is the clear front-runner. After all, Zurawsky had only $3,795 on hand at the end of 2010.

Money isn't O'Connor's only advantage. Even as a political newcomer who has never served in elected office, the young candidate has earned many supporters. Last year, in fact, he was honored at the Kennedy Lawrence Dinner, an Allegheny County Democratic Committee event awarding Democrats for their leadership and community involvement.

And ever since he launched his campaign, he's been earning lots of endorsements, including the ACDC, the Steel City Stonewall Democrats and the Western Pennsylvania Laborers Council. But Zurawsky questions whether all of his opponent's endorsements are legit, or whether organizations are merely backing the candidate because of his popularity and the likelihood that he'll win the election.

Zurawsky, who casts himself as the more progressive candidate, is particularly surprised that he failed to earn the endorsement of the Stonewall Dems, which supports the political interests of the lesbian, gay, bisexual and transgender community. Zurawsky, after all, received the backing of another LGBT organization, the Gertrude Stein Political Club. But he has a theory why the Stonewall Dems and others are supporting O'Connor.

"A lot of these organizations are interested in backing the winner," Zurawsky argues.

"I refute that outright," says Jim Sheppard, president of the Stonewall Dems, noting that his organization's membership voted based on how the candidates answered questionnaires.

But Todd Bryner, president of the Gertrude Stein Political Club, says there's something to be said for Zurawsky's theory. "It carries a lot of water," he says. "Everybody would love to be associated with a winner."