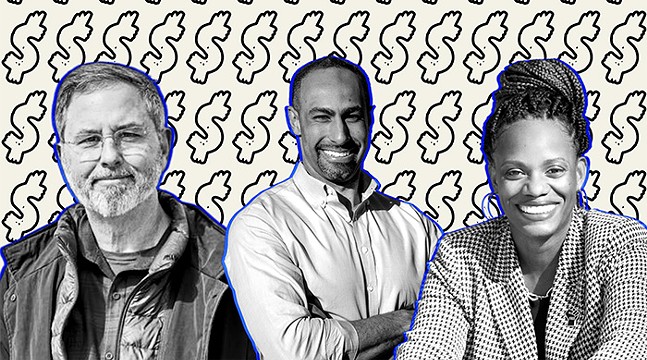 Illustration: Natasha Vicens/PublicSource
The Democratic primary election to replace retiring Congressman Mike Doyle is full of contrasts. The three-way race in the 12th congressional district features the moderate and progressive wings of the Democratic party, and a clash between Western Pennsylvania’s Democratic establishment and a wave of younger, diverse politicians who have gained momentum in recent years.

Irwin, a 62-year-old white man from Squirrel Hill, is far and away the wealthiest candidate in the race. He holds between $4.4 million and $17.9 million in assets, according to a financial disclosure he filed with the U.S. House, including several real estate holdings, bank accounts and retirement plans. (Candidates disclose each asset as a range, not a precise amount.) He disclosed a $240,000 salary from his law firm, Leech Tishman, and between $47,000 and $150,000 in income from rent and investments.

Disclosures by the other two candidates each show more debts than assets, highlighted by a couple law degrees’ worth of student debt.

Irwin declined to be interviewed for this story. Lee said in an interview that her election would be a necessary departure from the norm in U.S. government.

CP Photo: Kaycee Orwig
Summer Lee
“Our government is typically run by rich white men. That’s just a fact,” Lee said. “We’re seeing the wage gap widening between the super-ultra-rich and the average American. We’re seeing a federal government that has not moved on the minimum wage in over a decade. We’re seeing housing inequality, we’re seeing a lack of investment in infrastructure … precisely because those folks are just not impacted by it.”

Lee, a 34-year-old who was elected to the state House in an upset in 2018 and would be Western Pennsylvania’s first Black congresswoman, disclosed no assets other than an undetermined payout from the state employees’ pension plan, and no income other than her $90,000 state House salary. She also owns a home in Swissvale, and public records show she bought it for $155,000 in 2021.

Dickinson, 35 , said his background, having grown up in the foster care system, has made him “hardwired to empathize” with the issues of poverty, homelessness and joblessness.

Dickinson, who ran unsuccessfully against Doyle in 2020 and would also make history as the region’s first Black congressman, disclosed between $16,000 and $65,000 in retirement accounts and a University of Pittsburgh salary of $165,000. He bought his Swissvale home in 2018 for $355,000.

The U.S. Census Bureau estimates the median household income in Allegheny County is about $62,000. All three candidates exceed that figure, but by varying degrees. (Most of the 12th district voters are in Allegheny County, though some are in Westmoreland County.)

CP Photo: Jared Wickerham
Jerry Dickinson
Both Lee and Dickinson are examples of a major financial burden on the American public, according to the disclosures. Each reported between $265,000 and $550,000 in student loan debt from undergraduate and law school studies.

If elected, Lee or Dickinson would join a relatively small share of lawmakers who have student loan debt — 11% of members of Congress, according to a 2020 OpenSecrets report. Both candidates said their personal student debt positions them well to legislate on the matter, and both said they favor broadly canceling student debt.

“The problem with student debt right now is it’s holding people back,” Dickinson said. “We have young people who can’t buy a home, they have a hard time buying a car, they have a hard time getting credit … It’s important that members of Congress know and understand how that affects people and maybe have a better sense of how to approach policy to change that.”

Lee said student debt impacts Black women particularly hard and that it perpetuates a “cycle of poverty” rather than providing upward mobility. “The reality is, if you’re a Black girl from the Mon Valley who wants to be a lawyer, you have to go to college and you have to go to law school,” she said. “So the alternative is that we just don’t get to pursue our dreams.”

Irwin’s assets are wide-ranging and make him the only landlord in this race. He owns three Squirrel Hill rental properties, valued collectively at between $1 million and $2 million. He collects between $45,000 and $150,000 in rent payments annually, according to his disclosure. He also disclosed a 50% stake in a Westmoreland County golf course, River Forest Country Club. He valued his share in the club at between $1 million and $5 million.

CP Photo: Jared Murphy
Steve Irwin
If elected, Irwin’s wealth would not make him exceptional in Congress. Multiple analyses have established that a majority of members are millionaires. Roll Call estimated in 2018 that the average wealth of a member of congress was about $4.5 million, though much of the wealth was concentrated at the top.

One Republican has filed to run in this Democratically-leaning district — Mike Doyle of Plum Borough (no relation to the congressman of the same name). Doyle has not yet submitted a disclosure form to the House, and his campaign declined to provide it to PublicSource.

Two other candidates will appear on the Democratic ballot in May — Jeff Woodard and William Parker. Neither has submitted a financial disclosure and both polled lower than the margin of error in a recent opinion survey.

The primaries for the U.S. House, U.S. Senate, Pennsylvania governor and state legislative seats are May 17. Voters must register to vote by May 2 and have until May 10 to request a mail-in ballot. Pennsylvania conducts closed primaries, meaning that only registered Republicans and Democrats can participate.Charlie Wolfson is PublicSource’s local government reporter and a Report for America corps member. Follow him on Twitter @chwolfson.