Irving Penn: Beyond Beauty at the Frick 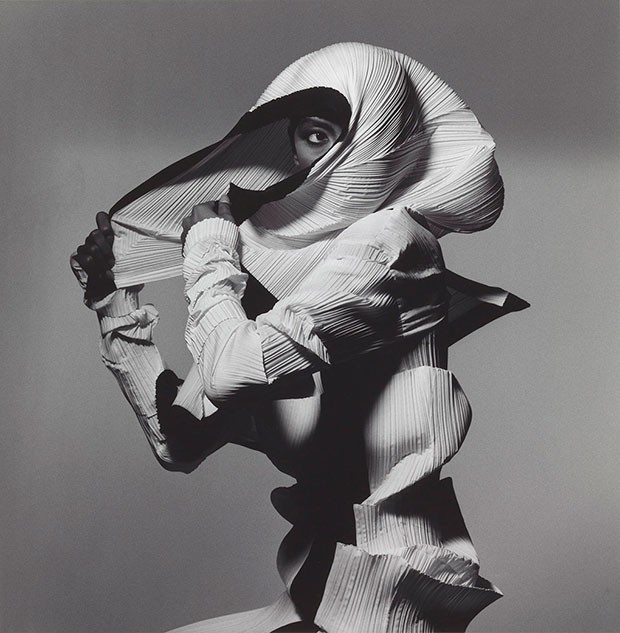 Irving Penn: Beyond Beauty gives us plenty of what we expect from Penn: those luminous black-and-white photographs from the 1950s, many from Vogue, apotheosizing mid-century haute couture. Images like 1952’s “Woman in Dior Hat with Martini (Lisa Fonssagives-Penn),” whose chicly suited model, in silhouetted profile — her face half-covered by the bonnet-like white hat — draws the sparkling glass in her gloved hand to parted lips; the photo’s title neglects only the smoldering cigarette between her fingers.

Yet as its own title suggests, this nationally touring Smithsonian American Art Museum retrospective of some 150 photographs spanning seven decades, now at The Frick Pittsburgh, reveals other sides of Penn, who would’ve turned 100 this year. Highly intriguing is his earliest stuff: what the New Jersey native called the “camera notes” he shot in New York and Philadelphia starting in the late 1930s. It’s street photography, sometimes peopled, often not, with a fondness for shop windows and commercial signage, exposures influenced by then-au courant European surrealism. Through Penn’s lens, straightforward images of real dressmaker’s dummies, or the giant eyes in an optician’s storefront, seemed “surreal.” That helps explain Penn’s transition from minimally salable street photography to lucratively imagined embodiments of consumer desire in the pages of Vogue: On one level, as exhibit text notes, Penn innovated by treating women’s gowns and suits as “shapes to be perceived as sculpture.” As styles evolved, his approach reached another high with work like 1990’s nearly abstract, endlessly fascinating “Issey Miyake Fashion: White and Black.”

Penn was also a sublime portraitist, eliminating props and even conventional studio space for rivetingly stark but intimate full-body renderings of artists, writers and intellectuals. His late-’40s images of a spider-like Salvador Dali, a gimlet-eyed Le Corbusier, ballet star Tanaquil Le Clercq, and Truman Capote lost in his overcoat, are iconic. Later portraits tended toward close-ups, including 1986’s splendid, multi-framed “12 Hands of Miles Davis and His Trumpet.”

Generous samples of Penn’s less-seen documentary/travel/ethnographic work is also here, much of it studio-based, including his empathetic early-’50s “tradesmen” series (chimney-sweep, fishmonger, etc.) and veiled Taureg dancers in early-’70s Morocco. One does pause, though, at unclothed images of women from Africa and New Guinea, like “Nubile Young Beauty of Diamaré.” Penn might have intended to challenge Western notions of beauty, but in an age of heightened awareness of cultural appropriation, a few of these photos feel a bit problematic.

While Penn had always experimented (including some strikingly modern nudes from the 1940s), exhibit text indicates he did so more starting in the ’70s, as haute couture declined and photography became more widely seen as art. His images of street trash (cigarette butts, chewing gum) both in studio and in situ, are intriguing — but don’t miss his Vanitas Still Lifes series, with exposures of lion and zebra skulls rendered practically tactile by masterful lighting. His color images, usually reserved for commercial work, date to the 1940s. Andy Warhol made art that recalled ads; but even when shooting ads, Penn made art.